I have a confession to make: I am a pretty big geek. I've spent the weekend rebuilding my computer, watching anime, and playing video games. Not the first-person shooter types; RPGs and "artsy" games. I have a decent grasp of the sci-fi world, so when a (similarly geeky) friend showed me that io9 was doing a countdown of the "100 Albums Every Science Fiction and Fantasy Fan Should Listen To," my ears perked up.

I won't spend much time explaining how io9 is a haven for those interested in this kind of thing. You can check them out on your own. What I wanted to do is give you this link:

and let you look through the list on your own. It has some pretty interesting stuff on it, and I've been exposed to some artists and albums that I really like. In fact, that brings us to the real reason I'm writing this post today. 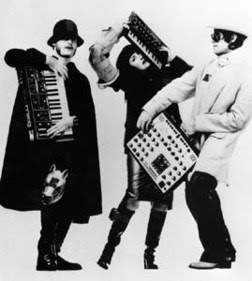 I hadn't heard of Add N to (X) prior to reading said top-100 list. They were a trio from London who made some crazy cool electronic music, along with some very edgy artwork and videos. Here's a song off 1999's Avant Hard that I really dig.


The group focused on analog synth compositions, following in the steps of Kraftwerk and Gary Numan and prophesying the direction Radiohead would ultimately take after their shift from rock music. Their first album, Vero Electronics, is repetitive and noisy, as if Phillip Glass had composed a Moog symphony with some assistance from Sonic Youth, but from there they began to write songs that took more form and periodically involved some (processed) vocals. Even on their second release, On The Wires Of Our Nerves, you hear a very inventive electronic pop group that wants to make your head explode. Here's a track from that record to illustrate the point:

Sadly, the group broke up sometime around 2003, but they released five albums that are definitely worth a listen. I highly recommend you at least check out Avant Hard to hear something not quite like anything else out there. Even now. Listening to their albums, I envision a robotic civilization in some other dimension where this is their Britney Spears:

and this is their Claude Debussy:

And though I was never the most loyal fan of the Beastie Boys, I do want to recognize the passing of Adam Yauch, aka MCA. From what I can tell he was one of the most genuine artists out there, and a good guy to boot. I do appreciate how the Beasties have always done their own thing with conviction and a sense of humor, while so many others are out there "rapping like it's a commercial." Rest in peace, MCA, and thank you for what you gave us while you were around.

Posted by kilter at 3:08 PM No comments: