Coachella Preview - pt 4 All The Bands We Loved Before

This is the final installment of "All The Bands We Loved Before", where I share with you Coachella "previews" by reminding you about bands we've already written about in blogs past.

Weekend 1 of Coachella has concluded. Most acts could be seen live via streaming, and many more could be re-broadcast through Coachella's YouTube channel. This tool has been totally invaluable in helping us decide who to see when we venture out for weekend 2. One of the tough decisions is skipping Arctic Monkeys. Yep. And even though Mookie swore he wasn't going to miss them in September, well... He did. They were scheduled a week before our wedding, and he was probably busy trying to catch pinkeye from a stripper that night. Mookie has since discovered Wu Lyf, and their coinciding performance looks like it's going to trump the primates.

But I'll still share some tunes with you. Track 11, title track, Click to play Arctic Monkeys - Suck It And See


tUnE-yArDs is an act that Mookie had on the list, but I want to see The Head and The Heart, so boom. Trumped again. Besides, as Mookie put it... "I never put that voice with tits" 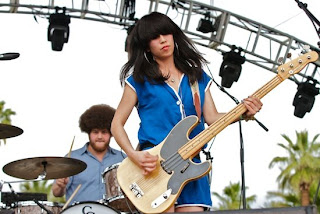 Looks like we will be seeing Yuck, though, as we scamper away from the end of the Givers' set to catch this band. Check out "Holing Out" from their self-titled album.

We've had to make a lot of tough decisions because of the schedule that does things like puts M83 and Explosions in the Sky against The Black Keys... Feist against The Shins and Kasabian... Bon Iver against Miike Snow, SBTRKT, and Godspeed You! Black Emperor... Sleeper Agent against Fanfarlo, Gardens & Villa, and Morgan Page... Fitz and the Tantrums against Real Estates... Band of Skulls and Metronomy against Le Butcherettes... Beirut against Girl Talk... Maybe our music tastes are just too varied. If you can help, please send up a comment!