Coachella Preview - pt 3 All The Bands We Loved Before 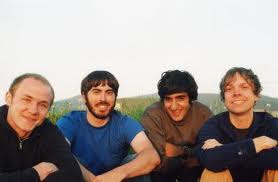 Explosions in the Sky plays at 10 PM in the Outdoor theater Friday night. Kilter gave us a preview of this post-rock band almost a year ago. "They build lush, extended (most songs are over 7 minutes long) soundscapes that really draw you in," he said. No new album, but you can check out a track from Take Care, Take Care, Take Care here: Explosions In The Sky

Girl Talk plays the outdoor stage Sunday night at 8:25 (this is the second-to-last show Sunday night on that stage.) He's up against Calvin Harris on the main stage at the same time, Company Flow on the Gobi stage, and his set will end just before At The Drive In is set to take the Coachella stage. Yikes. One of many tough losses for fans who have to cut out of a show early or give up seeing one of their favorites altogether.

James plays the Coachella stage at 3:50 on Friday, and Miike Snow headlines the outdoor stage Saturday night at 10:10.

Hard to know for sure whether they will juggle set times for Weekend 2... It would be nice to have this much time to plan ahead!

Prepare yourself by getting all the music using the links below!