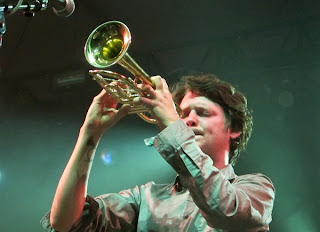 Beirut is not a band I think about very often. Sometimes I used to forget what they even sound like. I do that a lot. When you review a lot of bands, you sometimes forget that you've ever heard of them. And then you read a great review you wrote and you think... Oh.
So when I saw that Beirut was up against Girl Talk in Coachella's lineup, I made a mental asterisk to figure out how much I want to see Beirut. I knew I liked them, I knew I wanted to see them, but couldn't remember why.
Click to play Beirut - A Candle's Fire


Because... I really like Girl Talk. He is the one of the only DJs who can get me working out when I don't want to.
But I accidentally caught part of the live stream that Coachella put up of Beirut... And forget it. I am sold. Live horns. Oh yeah, that's right. Yes. I'm really looking forward to this. 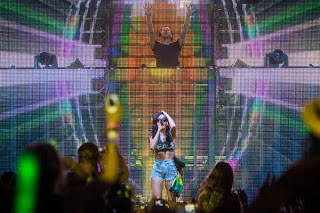 Unfortunately this time slot also features Calvin Harris. To be quite honest, I am not sure I could point out a Calvin Harris track either, although since Rihanna joined him at Coachella I guess I can surmise that he had something to do with the "We Found Love" track? Mookie is going to be so disappointed that I even chose to include him in this post for my lack of knowledge, but we've still got a good several dozen of artists to cover before Weekend 2 begins!
Check out Calvin's Soundcloud channel here.

And in the interest of fairness, let me share that Company Flow and Justice also overlap the Sunday 8 PM set time.
Being that I only seem to like rap if it was released in the mid- to late-80's, no thanks to Company Flow for me. But I'll share some of their work with you here. Company Flow I guess is technically hip-hop, but I will still call it rap. And even though they've been around for 20 years, it's just not my style. Ben Westhoff, contributing to LA Weekly, says they are "seminal" and bemoans the low attendance to their show. Listen. Most of the concertgoers were just doing the fallopian luge when Company Flow hit the scene. There's that.
This is "8 Steps to Perfection," one of the singles released in 1996 off their debut EP.
Click to play Company Flow - 8 Steps to Perfection