Coachella Preview - We Were Promised Jetpacks

I was scrolling through my Twitter today, and chuckled (and RTed) over something Wil Wheaton said:
"Girlfriend in Tacoma?" "I know, I know..." "It's SERIOUS!"

So of course I started thinking about Morrissey, Morrissey songs, and lesbian Latino girl bands. Whut. Anyway. I had been listening to the 2009 We Were Promised Jetpacks album all day prior to that, which sounds a bit like a happier Morrissey, if he was Scottish. 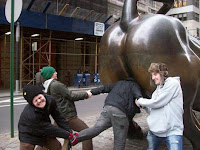 And after the Girlfriend In Tacoma reference, (still chuckling), I began listening to In The Pit of the Stomach, We Were Promised Jetpack's 2011 album. They mention being in a coma on the first track! Kismet what!

Click to play We Were Promised Jetpacks - Circles and Squares

I know I've introduced you to Jetpacks before. What's more, I squawked all about how I would love to hear this kind of music live at a festival. Finally, THREE YEARS LATER, I get my wish.
Yeaah baby! Check out my post from 2009: Form In An Orderly Queue...

Here's what I said then: "Speaking of that energy, how about a love song that isn't slow and melancholy, but throws all those heartsick feelings into a power ballad of the indie persuasion?" I guess comparing it to Morrissey today isn't a terrible stretch.

I'm so proud of these boys for continuing to improve their sound and their presence. I can't wait! Coachella is just about 6 weeks away! Watch for Jetpacks to take the stage on Saturday of both weekends. And check out another fine tune...


Click to play We Were Promised Jetpacks - Hard To Remember

Email ThisBlogThis!Share to TwitterShare to FacebookShare to Pinterest
Labels: Coachella, girl in a coma, girlfriend in a coma, morrissey, we were promised jetpacks