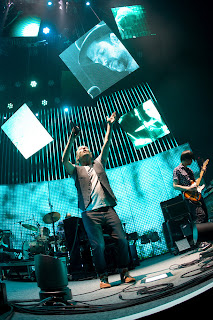 I keep forgetting that Radiohead is playing Saturday night at  Coachella. There are so many amazing bands at this year's event, that I just blank out on the main reason I am going to the show. I blame it on amazing line-up overload!

Radiohead is one of those bands that I thought had become too big for me to ever see. It's difficult for me to pay a giant ticket price to see 3 bands at a stadium, no matter how epic they are. I skipped seeing the Jay-Z & Kanye West Watch The Throne tour because I wouldn't pay those ridiculous prices to be up close, nor would I pay-up for a "still pricey" balcony seat. Wrapped up in a very pricey 3-day festival affair is something where the math adds up for me, as long as you don't add in the costs for cortisone shots in your heel after the foot damage you will do after three days on your feet.

Radiohead might be one fo the most reviewed and analyzed bands in the last 10 years. I can give you a perspective on In Rainbows and Limbs, based on an experience I just had yesterday, that no other reviewer has ever given you. It's a dentist's best friend. 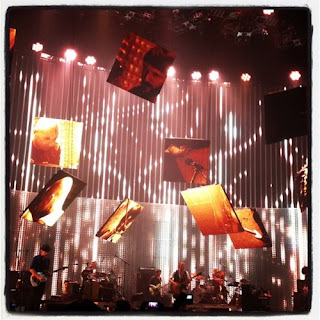 I haven't been to a dentist in at least 10 years. After a quick check, the cleaning was going to be extensive. Four shots of anesthesia into my upper left quadrant. That's the only part of my mouth they could get to that day. One and half hours of serious scraping just under the gum line. I have a high pain threshold, but the duration was going to be taxing as I tensed my way through it. My hygienist was working out of a spot right next to the chatty front desk of the busy office. She apologized for all the noise as she was getting ready to numb my mouth for the injections. I decided to ask her if it was ever acceptable for someone just to put in their headphones and listen to music when the cleaning took place. Her reply was literally music to my ears! Of course! Drown it out buddy, it's not a problem at all!

Knowing that I had this post half-way done, I quickly queued up the last two albums of Radiohead, and  barely felt the needles piercing my gums while being completely distracted by Thom Yorke speaking directly into my head: "Full of holes / Check for pulse / Blink your eyes / One for yes / Two for no."

Staring into a bright light and trying to figure out if the scraping was in the songs I was hearing or the stainless steel hook ripping the tartar off my enamel was maybe the most twisted music experience I have ever had.

I've been peeping out pictures of Radiohead's current tour set, and it looks amazing. It's going to be a multimedia mashup of a night.

After checking out some amazing fan photos from the band's previous dates, I wanted to get an idea of what songs I might expect to hear at Coachella. If you don't know, setlist.fm is the best place to get that kind of scoop. Here was the set from the Glendale, AZ show on March 15. 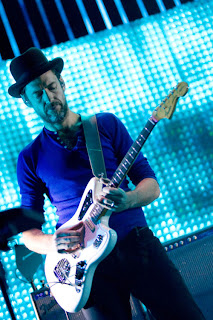 Encore:
How to Disappear Completely
Kid A
Lucky
Bodysnatchers

Encore 2:
Give Up the Ghost
Reckoner
Paranoid Android

Whoa! "Packt Like Sardines in a Crushd Tin Box" hasn't been played on a tour since 2001, so that's exciting to know! It is my favorite song off all 8 albums.

This is a remix, but I think you will like it:

*All the pictures in this post were taken from W.A.S.T.E. Central http://www.waste-central.com