Hiatus, WHAT! If you slept on this year's Coachella, despite there being TWO weekends to choose from, I don't understand what you were thinking. This is the hiatus ender. This is the year. Take note:

The Shins end a 5-year touring hiatus this year AND deliver a new album. Mazzy Star has been on hiatus since about 1998! Also not together since 1998, the band Refused. Brit band Pulp split in 2002 and will be on stage to entertain at Coachella...
And saving the best for last... At The Drive-In has reunited and will be performing at the festival.

So when someone asks who you're going to see at Coachella... Or why you're sad you're missing it- it's the year of the reunions. 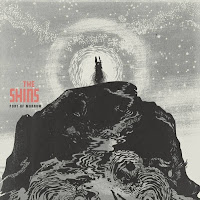 We begin with an all-time favorite by The Shins, from 2003's Chutes Too Narrow. I definitely hadn't heard of the Shins in '03, but it was this album that started popping up in coffeehouses around me in '06. Zach Braff definitely heard of them. They had a song on Scrubs early in the decade and then he used them for the "Garden State" soundtrack. So one way or another, including a Gilmore Girls soundtrack appearance, I should have... I just didn't. Four albums, three EPs, and a five year hiatus followed. This week, Port of Morrow dropped with an absolutely lovely collection of tracks. The Shins is pretty much a revised band, too, but it doesn't matter. This album is as much a pleasant collection of tunes as every other James Mercer-crafted record. 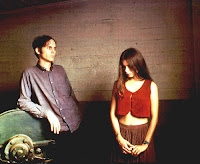 Oh my Mazzy Star(s). Mazzy Star! If you don't think you know them, you're too young to realize the name of the band but you have heard at least one of their songs at least forty-one times. The duo of Hope Sandoval and David Roback released a double A-sided record in October and will release a full-length album on their own label later this year. I'd love to share a deeper Mazzy Star cut with you, but just in case you aren't placing them... here you go.

Performing punk music just this side of Anarchy and hailing from Sweden, Refused threatened to take over punk rock in the 90's but I imagine the world just wasn't ready. They broke up in 1998 and in 2006 the band's guitarist directed a documentary about the band's last year together, called Refused Are Fucking Dead.
Regarding the reunion at Coachella, the band says

It's been a motley 14 years since our band came apart. We've all kept busy in our respective endeavors but we've all remained friends and kept in touch. There have been offers, and lots of jokes about these offers. We've sort of looked down from our high horses and made fun of people who've just wanted to share the psychopathic intensity that we would deliver on a nightly basis in our post-pubescent prime. A reunion has just seemed irrelevant to us. Too much other shit to do.

We never did "The shape of punk to come" justice back when it came out, too tangled up in petty internal bickering to really focus on the job. And suddenly there's this possibility to do it like it was intended. We wanna do it over, do it right. For the people who've kept the music alive through the years, but also for our own sakes. We feel that you deserve it and we hope the feeling is mutual.

Also from another country, and also having spent the last decade on hiatus is the band Pulp. Their reunion was announced in 2010 and they've played multiple dates in Europe throughout 2011, but they still count for this list. They've not been to the States yet. And they'll be here in a little less than a month. They're kind of weird. But you're kind of into that.


As for At-The-Drive-In, their decision to accept gigs at Coachella, Reading & Leeds, Japan's Fuji Rock and the like was pretty much just all about money. According to Omar Rodriguez-Lopez,

"Will there be a new album? No, no, no. At The Drive-In is more of a nostalgia thing – it's songs we wrote when we were all in our 20s and we're doing a couple of shows ... We're not getting any younger and there's been an offer of money every year. You can't avoid that. You'd be a fool and a politician to pretend that wasn't part of it."

I first heard of ATDI, actually, after they had even split. I fell quite deeply in love with the band Sparta, and in researching their beginnings, I came across the band's earlier work and Omar's continued work. He produced an album for Juliette Lewis and for The Butcherettes. And after Sparta split/went on hiatus, I continued to follow both Jim Ward and Tony Hajjar. So being a big fan of Ward, I am ridiculously giddy to have the opportunity to see him play with the thing HE started so long ago. After seeing both Mars Volta and Sparta live, this is just an exciting culmination for me and I am insanely jazzed for it.

Check out one of their signature frenetic tracks, off In/Casino/Out but be careful with the slam-dancing.
Click to play At The Drive-In - Chanbara

And now check out the only ATDI song with Jim Ward on vox...
Click to play At The Drive-In - Hourglass

Can't not share one of my favorites. You get three ATDI tracks in this post because I am literally that excited.
Click to play At The Drive-In - One Armed Scissor