Givers is a Lafayette, Louisiana-based quintet’s whose brilliant debut -- In Light, is a collection of 10 songs that feels like 30. It's filled with a happy warmth of funky time-signatures and bright melodic guitars and a pair of voices that coat the fun with sugary goodness.

The band’s start was with lead singer/guitarist Taylor Guarisco and lead singer/percussionist Tiffany Lamson both attending the music school at the University of New Orleans in the fall of 2005. A living arrangement gone awry led to Lamson crashing on Guarisco’s couch. The two of them grew as friends over their mutual love for music. Guarisco immersed himself in the sounds of New Orleans as a youth, which led him to play in a few different funk, Cajun, and Zydeco groups. This influence on his playing was easily complimented by Lamson's strong upbringing and appreciation for classic rock, soul, and pop. The musical connection between them was not something they could ignore. With her drums set up in the kitchen and Guarisco on bass, the duo would play together long into the night, eventually singing together as well as finding their voices matched each others’ perfectly. “There’s a very magical part,” explains Guarisco. “We slowly started inspiring each other to sing more and more. Honestly, that’s one of the major miracles of my connection to Tiffany, and hers to me. We didn’t have anyone else in our lives beckoning us to sing out.” That's a special moment I can relate to. My friend Juan reached out to me to sing while he strummed the guitar, and it builds a trust that trumps a foundation of years of friendship. 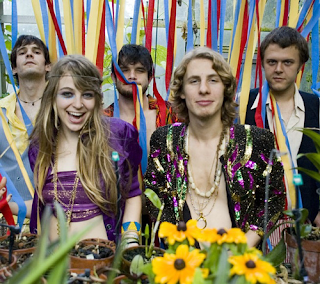 Fast forward a few months to a call from a club looking for a band to fill a last minute spot. Though there wasn’t a band to speak of between Lamson and Guarisco, they immediately called Campbell, Leblanc, along with keyboardist Will Henderson and saxophonist/keyboardist Nick Stephan.  The band improvised for over two hours and the crowd’s response was a confirmation. “Being into improvised music and having that be a big part or our lives has had a huge influence on our sound as a whole,” explains Lamson. The chemistry was there and the six of them began playing together regularly, deciding to call themselves Givers.

For the next year the band headquartered in Campbell’s apartment, turning jams into songs, and recording an EP along the way in the very same place. “Kirby and Will and Nick all lived in the same house, and Taylor was basically living there,” explains LeBlanc. “Everyone was hanging out all the time, and that’s what solidified us as a group.”

Sometimes a "place" is the catalyst for the chemistry, Both Guarisco and Lamson credit being back in Lafayette as one of the major influences on what they were creating.  “I can't imagine growing up anywhere else and being the way we are. There is a life about the music here. People are drawn to dance with freedom; there is a sense of enjoyment in music that I haven't seen in many other places,” says Lamson. “Being from southwest Louisiana has an effect on everything we do,” agrees Guarisco. “The way in which we play music...the way we talk...the way we think...the way we dance...everything really. Because of the heat in the South, people take their time in their day-to-day affairs. Being from the South, we have all learned how to slow down and appreciate life as it is here now--something that in most parts of the world is totally lost.”

Begging their future manager, Aaron Scruggs, booker for Baton Rouge venue Spanish Moon for a gig ended up impressing Scruggs.  That Friday night gig turned into a follow-up offer to open for Dirty Projectors in July--one of the only stops in their tour where they happened to need an opener. “With that one show, everybody dropped out of their college career, the touring Zydeco band, and whatever else prevented us from preparing for that one show.  And it wasn’t for a tour, it was for a single show” says Guarisco. Dirty Projectors liked the show enough that night in Baton Rouge to book them as an opener for the east coast leg of their fall tour. "It was that tour that solidified our paths in music. We thought, if this can happen, anything can happen." explains Guarisco.

While on tour with Ra Ra Riot, the band made a stop at the Austin City Limits festival, where their set was seen by Daniel Glass, founder of Glassnote Entertainment Group (Home to bands Phoenix and Mumford & Sons) , who was immediately taken by their sound and charisma.  “Givers are genuine, unique and uplifting,” says Glass.  “Their live show is a visceral experience that captivates you, and makes you feel like a member of the band.”

I'm pretty stoked to see them at Coachella, especially after seeing them in that video from their Fallon performance.

Enjoy Givers - In My Eyes and pick up the album!
Posted by mookie at 10:04 AM