I've been pleasantly surprised by two albums in the last year, and these albums hold up every time I play them. Blink 182's Neighborhoods is such a vital album with Energizer Bunny energy, and AWOLNATION's Megalithic Symphony is like a steam engine. Here we go, can't stop. 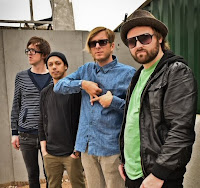 Formed and fronted by Aaron Bruno, AWOLNATION is electro-rock that gets recorded as soon as it's conceived, without a lot of thought or explanation. And it feels fucking good. Their debut album was released a year ago after the first single, "Sail", opened at #30 on Billboard.

I have so many favorite tracks on this album. And I've never had the chance to enjoy them publicly. As in, shared with others simultaneously. And that's a shame, because Track 5, "Jump On My Shoulders", really calls for you to pull those earbuds out and rally those around you.

But it doesn't stop there. Track 6 keeps the momentum. Figuratively, people! Figuratively!

I would not like to burn down any buildings, that's not my place. There is enough of that going on, or at least metaphorically...

Is it wrong to hope for rain ONLY for this band's set? Because jamming like crazy with other hippies in the mud does not sound terrible. OK, I take it back. Check out their latest video. And GET THIS ALBUM, SERIOUSLY!