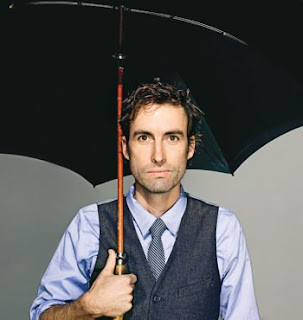 Andrew Bird has six solo albums, with a seventh to be released this year. Every album a dizzying journey of the mind that remind me of restless dreams while napping some place warm and noisy.

Andrew has played music since he was 4 years old.  “Music just swallowed me whole,” he explains. “I am what I do.”

It's hard to put Bird in a box. It feels a bit folk-rock, similar to Devendra Banhart or Sufjan Stevens.  It reminds me of the Decemberists with the way they sometimes sweep between lo-fi and big sound. Really though, he doesn't sound like anyone else. He combines smart lyrics with melodies and orchestral arrangements he never writes down because he assumes if it's any good, it will get stuck in his head.

Here's a track off the double album Noble Creatures from  2009:

Andrew says this about Hot Math: "[It's a] lo-fi recording I made myself in my barn. It’s an example of a West African poly-rhythmic groove I’ve been into for years and in this case I was clearly enjoying myself. This is elusive stuff. It just doesn’t work by choreography; you just have to be in the right mood. It goes on for seven minutes and I intended to shorten it but it just feels too good; besides this is my “indulgent” record."

I suggest you watch the Ted talk Andrew Bird has done. It's truely inspiring to watch his violin technique!

Noisetrade is offering a free download of a four-song EP by Andrew Bird in advance of the release of his new album Break It Yourself on March 6.

The EP includes “Eyeoneye,” Bird’s lead single for Break It Yourself; along with “The Crown Salesman” and “So Much Wine” from a recently released advance seven-inch; and an additional song from the Break It Yourself sessions called “After Dinner Jam.”
The entire Break It Yourself project will be available for streaming on Monday, February 27, at NPR.org. For a list of future concert dates, and to find out how you can get free music with your tickets, go to andrewbird.net/ticketbundle

I'm going to try to catch Andrew Bird at Coachella, but first I need to get through his large discography. Feel free to use the links below to buy his music, just as I did.