My idea of a perfect government is one guy who sits in a small room at a desk, and the only thing he’s allowed to decide is who to nuke. The man is chosen based on some kind of IQ test, and maybe also a physical tournament, like a decathlon. And women are brought to him, maybe ... when he desires them.


How does Mookie turn a bad day into....well something better? He folds cards for four hours and then someone gives him $400. Boom. 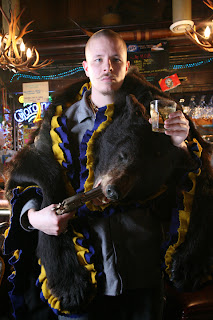 I haven't played cards in awhile. Poker. No Limit Hold 'Em, in a tournament format, is my game of choice. The last game before my hiatus I beat a nice sized field for a nice sum of money. The opportunity to play after that just never came. Got busy...side work, got married, just didn't want to go grind my teeth for 4-6 hours.

A friend of mine, who still plays regularly, had kept on me to come play a tourney. After a rather shitty dinner with a family member, I decided to take him up on his offer to play the 10PM tournament at Treasure Island. I finish deep, but just outside the money. It was a horrible beat in my first hand after the break. I look down to see pocket aces with the short stack on my right moving all-in. I also push with the player on my left also pushing in. No other callers, we flip over our cards and I see some bad news. the other two players both have AQ off-suit. You might think this is good, but you would be wrong. I have only a small chance to improve in this hand. With no more Aces in the deck, I need the board to blank out. Dealer burns a card and we see the flop.

The next day, was not a great day. Disappointment and dissent. I'm not gong to get into it, but it ends with my kicking and punching a wall and screaming in my garage. I decide to leave before  my neighbors call this disturbance in. I need to get my mind off things for a bit, and I'd like some redemption from the night before. MORE POKER IT IS!

I'm off to the South Point to play in the 7PM tourney. I have a pretty good start, but the cards turn cold...and I fold cards and steal the occasional pot with my tight image and smart betting. I had mostly been listening to the podcasts of Marc Maron on the iPhone, but decide to switch to some music. Music has always been a tradition for me in the late stages of a tournament. The albums that lead me to victory tend to become favorites of mine (this is what they call foreshadowing, kids). I look through the music I have loaded on my device and see that I have Prof's latest album King Gampo.

I learned of Prof months back from one of our regulars, known as the "Doctor", in our room on turntable.fm. The song "Gampo" was one of the Doc's party starters, and it's always been a hit in our room, so I went ahead and downloaded the free album from Prof's bandcamp page. Having never listened to the entire album, I decided Prof would be my soundtrack to victory. The road was longer than expected, so the album got two full spins before victory was mine.

Prof calls the Twin Cities home and recently went on tour with blog favorite Atmosphere. There is a silly party mentality in the lyrics of Prof, much which revolves around girls and drinking. I mostly  pick up on the seriousness of some of the heavy mental pictures that Prof paints in his rhymes. Even if the message doesn't interest you, or escapes you entirely, you can't help but appreciate the wide range of Prof's ability in the delivery, or the big party-inducing beats he uses as his vehicle. 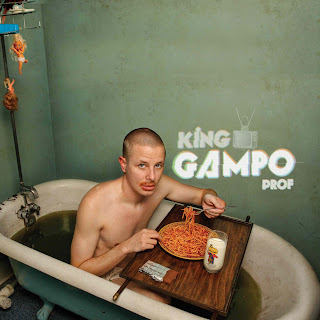 "Gampo" happens to be the first track off the album, and still remains as my favorite.

You can find me stiff, like a samurai, on a llama ride, down a waterslide, getting sodomized / I’m a wallaby, I’m a king of a colony / By the way I’m Wil’n’out you would think I just won the lottery

The lyrics are silly, but how can you not love that song?

How did the night end up? Four players left and I had just folded an 8 and 3 off-suit hoping to get one final hand to play before I went broke in the big blind, only to get another 83 off-suit with all my money in the pot. Two players call my all-in bet and when the players cards are all face up, I see some bad news. I see that my 3's are dead since one player has what I call "shrubs" (pair of threes) and another player has AQ off-suit. I need an 8 to win, and also dodge an Ace and a Queen. Which is what happens! I win the main pot, and the player with pocket threes knocks out the player with AQ from the game! Down to three players and I'm still in the game! We decide to split up the prize pool and I take my cut and I leave the poker room listening to "On My Way"! Now I'm only  punching the air... in victory!