Our Hearts On Fire Will Light The Way

Do you know what Mookie and I used to do?

We had record store dates. For a week or two, we would collect the names of artists we'd like to check out, and then we would go to Zia. We might try them out at listening stations, we might make tough decisions on which CD to discard, or we might buy them just because of something we heard or because of the album art.

Then we might drive around town listening to our new CDs, or in some way, shape or form, we would listen to our new CDs within a few days of getting them.

I'm listening to JJ Abrams on the Nerdist podcast. And he says, "...As things become more accessible, and more effortless; in terms of... You want that album, you can click that button, that's not even a real button, and you have it. Even though you can't see it or feel it. We're living in a time of virtual existence, you know, paying for things with money you don't see to get something that you can't actually hold. That feeling of having a record that you might not actually listen to, because it was such a breeze to get a hold of it. And then you don't even take the time to listen to it."

I'm not sure of the exact count, but I believe there are about 14 albums I have received in the last week that I have not yet listened to. Something is wrong. Do you know what else is wrong?

Abrams goes on to say, "It is a kind of curse that we are not appreciating the stuff that used to take some effort... The thing that's so crazy is, the idea that you're with someone, talking to someone, and your phone makes a little vibrating sound, and you just look away. There's so little respect left for being in the moment... The rule has become that elsewhere and other takes precedent over here and now... Because, 'Oh, well, what else is there?'"


So OK. Let me go into my recently-received albums, which were acquired by pushing not-really-a-button, and see if I can find any gems.

Speaking of getting music easily. We're sitting around spinning records... Wait. No, we are virtually in a room together, clicking buttons to play music across the interwebs for each other, and an old friend is losing his mind trying to figure out how to get IAMDYNAMITE prior to its release on the net. Oh sure, google it now and you will find all kinds of hits. But before the first single dropped this week, all you could get was maybe some Black Eyed Peas hits. Anyway, he loses his mind when he finally acquires it and within a week he is seeing them live. Now that's love. 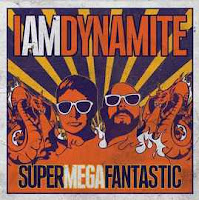 But IAMDYNAMITE has been sitting in my virtual music vault since Monday. I might not have even realized I had it. No appreciation. But I was missing out, Oh My God.

Click to play IAMDYNAMITE - Riot in the Neon Light

The album is mostly a repetitive collection of high-energy songs, but the energy is such a fun one that you mostly don't mind. Why should you? You need something like this. Let this be what you're listening to so that you can be distracted from the "here and now"... Because otherwise you're just standing in like with a Keurig machine at Bed, Bath, and Beyond smelling the farts from the asshole in front of you.

When you're done for the day, just repeat the following mantra...