Or Are You Gonna Be Free

AISHA TYLER ASKS: "Are you, at this point in your life, with everything you've done, and the amount of political work you've put your passion and your energy into, do you feel more or less optimistic than you did, say, when you were first in Rage?"

TOM MORELLO REPLIES: "I feel much more optimistic, and that has to do, principally, with fatherhood... The purity, and the innocence that I see in my kids makes me...wanna fight for their world...
When I see it reflected in other things, for example...
The first song I wrote for the latest Nightwatchman record... There was a factory in Korea where they make [the low-end Gibson guitars]... The workers in that factory formed a union, and because they formed a union, they were all fired. The factory was moved to China... So these Korean workers were out of work, came to the United States looking for help.

"They of course found The Nightwatchman. 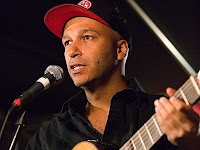 "I was happy to do a benefit show for them, but the day before the benefit show, the earthquake in Haiti happened. So these Korean workers had traveled six thousand miles, and were in desperate financial need for their wives, their children, their strike fund; voted to donate 100% of the proceeds from THEIR benefit show to the Haiti Relief Effort.
And it was a very moving gesture of international solidarity.
They went home penniless.
...That day, when they did that, I wrote the song "Worldwide Rebel Songs", sung it the night of that show, and it became the cornerstone for this new record.
Because it's a reflection of, and a window into, the kind of world that I'd like to live in. The kind of world that I fight for in my music.
The kind of world that I want my children to be able to enjoy, you know, free of the fear and the pain and the sorrow that afflicts much of the planet due to crushing poverty and awfulness. You know, and environmental terror.
There are moments like that when you really see how good humanity can be, and I see that in my kids... A purity and a goodness that gets spoiled by... You know...
The world can be the world we make it. There is no ceiling to it.
So let's make one that's good for little kids like mine."

Fortunately The Nightwatchman does more good than just write flaccid songs. Don't hold that against the talented guitarist.