So The Kids They Dance and Shake Their Bones 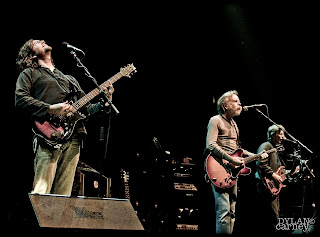 And that we did when the Furthur bus rolled into town. The night began with some pre-show “tailgating” in the parking lot, (even though it was a blustery November night in Wisconsin) with stories of first shows, how many shows attended, Jerry shows and post-Jerry shows being shared. Ahh... some things never change and that makes me smile. However, being the wimp that I am, freezing my ass off overtook the nostalgia and I didn’t last long in the parking lot and had to move it on in.

As Bob and Phil waltzed on stage my space got smaller as the crowd shifted forward. It’s a concert, I know there will be close quarters and my personal bubble will be challenged, but when I have a seat and have to try to find my way back to it after a bathroom break and nobody will let me through... well that just pisses me off. I know, who goes to the bathroom during a show!? Yours truly! Yes, I have considered Depends.

“The Golden Road” got things shakin’ inviting us to “come and join the party every day”. CLICK TO PLAY THE GOLDEN ROAD
Some people have taken that invite literally when they decide to follow the Grateful Dead and their affiliated projects, on tour. In theory that sounds like fun, but again, wimpy me, likes her own bed and a daily shower.

Two of my favorite Dead songs were played and of course, I got misty eyed. “It Must Have Been The Roses” CLICK TO PLAY IT MUST HAVE BEEN THE ROSES and the encore, “Black Muddy River”, CLICK TO PLAY BLACK MUDDY RIVER always grab my heart and apparently everyone else’s as the dancing slowed to a group sway and we became a community.

“Black Muddy River” will forever be remembered as the 2nd to last song Jerry sang live with the Dead at Soldier Field in Chicago before his death in 1995. As sad as we Deadheads are that he is no longer smiling down on us from the stage here on earth, we are fortunate to have the next best thing in John Kadlecik. As a former member of the Grateful Dead tribute band, Dark Star Orchestra for 12 years, his Jerry vocals are spot on. If only he had the belly and the beard.

As the songs intertwine it’s always fun guessing what the next song they’re leading into is going to be. It’s a game we Deadheads play. I think I got one right... I shall blame it on being over served. At any rate it was an amazing show! We got some Dead songs, we got some covers (Dylan, Rev. Gary Davis and The Young Rascals), we got to shake our bones, we got to sway. We got a miracle!