It seems you either love Tom Waits or hate him. I, for one, am in the love school. I realize his voice can be difficult for some people to get past, but his music is like nothing else in the world. It ranges from jazz to Vaudeville, from sailor shanties to sweet, sweeping ballads. In my opinion he's one of the best songwriters/composers we have around today. He also seems very witty and would probably be a blast to hang out with. Tom, if you happen to be reading this I have a bottle of scotch I'd be happy to share. 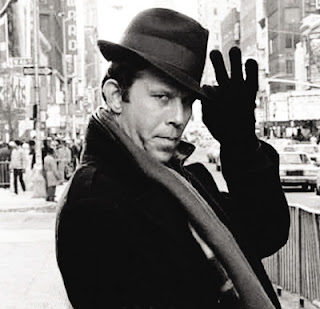 Waits' latest album, Bad As Me, was released on October 21st. This is the first new studio material we've heard since 2006, and his first "proper" studio album since 2004. It was well worth the wait. The first track, "Chicago," hits you like the train ride it alludes to and there's no stopping this express from there. Here's that opening track:

In typical Tom Waits fashion (as if there were anything typical about him) the textures of the album shift constantly, but there's always a charm and a nostalgia present. I'm not sure what to call it but true Americana. Not the folky sound that has become a genre definition; songs that touch on American music from its roots though its development and even, at times, its collapse.

One thing I've always loved about the man's music is the way it can swing from personality to personality and still make sense. Take for example, the tracks "Back In The Crowd" and "Bad As Me." The two are back-to-back so you move directly from a soft, latin-infused ballad to a sinister, frantic attack. It keeps you guessing and demands your attention, in the best way possible.

Click to play Tom Waits - Back In The Crowd

Overall, I'm putting this up there with the best of Waits' albums. In a way it feels a lot like Mule Variations, which is widely considered a masterpiece. I'm just happy the guy keeps making such brilliant music, and I'm glad he's around as a foil to a lot of the nonsense that's on the radio these days. You probably already have the album if you're a fan. If not, get it now. If you're new to Tom Waits, give it a shot. This is a pretty accessible album and shouldn't frighten you too much.

Email ThisBlogThis!Share to TwitterShare to FacebookShare to Pinterest
Labels: Americana, bad as me, jazz, tom waits