I Know You Think Too Much To Lose 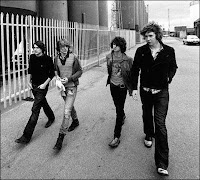 
We overbooked ourselves, and we need some time off. So we've chosen not to go to the Arctic Monkeys concert tonight. That means it's a perfect time to write about The Kooks. Oh, you hadn't heard? Yes, the lead singers of the respective bands are actually 13-year-old girls with snobbish rivalries toward each other. Both bands are part of the UK's British Invasion pop movement, although the Arctics would disagree that they're the same caliber of band. Over the years, other pop bands across the pond have accused The Kooks of being rip-offs and/or making songs for the radio.

Well, what are you going to do. This whole sound is full of stuff that "belongs" on the radio. It's catchy and singable. That's how it goes.

Why are we overbooked? Why do we need some time off? Yours truly, The Little One, has managed to whip up a production of a wedding in the last 7 short weeks. And next week, Mookie and The Little One are going to Fuck The World Off.

Click to Enjoy The Kooks - F__k The World Off

So, listen closely to the song. And enjoy.
And go see the Arctic Monkeys if you have the chance.

Posted by The Little One at 7:59 AM No comments:

Email ThisBlogThis!Share to TwitterShare to FacebookShare to Pinterest
Labels: Arctic Monkeys, british invasion, junk of the heart, the kooks

All of a sudden, I can't breathe

How low is your self esteem / And how low could it possibly be? / I know, I know you're in love with me / And I've been ignoring you


That's the official video for the song Swimming Pool by the band The Front Bottoms. The Front Bottoms are a Folk-Punk two piece based out of Jersey that released their self-titled debut album this month. Their unique, but completely approachable sound, has kept me listening to this album again and again. Being a two piece, it's going to be rather simple and stripped down, or so you might think. The fast drumming from Mathew Uychich along with the acoustic-power-chord guitar and vocals of Brian Sella are a perfect fit with the lyrical storytelling that I'm thinking everyone can relate to. There are various horns and bells and other instrumentation throughout the album, but I wonder if they leave out this additional embellishment when they tour. This band sounds so fresh to me, it's hard for me to identify the bands influences but I'd be willing to bet that The Mountain Goats would be high on their list.

Click to play The Front Bottoms - The Boredom Is The Reason I Started Swimming It's Also The Reason I Started Sinking This album is fantastic. If you like the video and the song, I really think you will be completely blown away by the rest of the album. Purchase it below!
Posted by mookie at 5:55 PM No comments:

Well, hey there everyone. I know it's been a while since I managed to get a post up here. I have to apologize. Between traveling and moving I haven't had time to get a proper write-up done, and you deserve better than halfassery. You know you do. So please forgive me and let's move along with our lives.

About a week ago Wilco streamed their entire new album for 24 hours. If you were lucky enough to catch it, you'll know why I'm excited for the release on the 27th. I know that's almost two weeks away but I want to bring it up now so you can share in the anticipation if you missed the streaming event. Wilco has continued to push the boundaries of folk, pop, and rock music over the years. They dabble in experimental sounds as effortlessly as they perform unreleased Woody Guthrie tracks. On the new album, The Whole Love, they continue their genre-breaking approach. Here's the opening track, which really blew me away. Settle in and relax, though, it's a long one:

It's a small opus that shifts musical styles with ease, to the point where I had to make sure I was still listening to the same song about 4 minutes in. It's a great opener to a great album.

General consensus from folks who streamed the album is that it's probably the band's best work since Yankee Hotel Foxtrot. That's a big statement, but I can agree. The thing that jumps out most to me is the hint of The Beatles that comes through. The songs and production come together in a way that evokes Abbey Road. That's another big statement. I'll stand by it. Wilco is making some of the most interesting and exciting music around right now.

Out of respect for the band, I won't post any other unreleased tracks from the album. They have been gracious enough to stream the last few albums directly from their website prior to release, which is very cool, and I don't want to take advantage of that gratuity. They do, however, have a new video for their song "Born Alone," which I can pass along with a clear conscience.

So yes, it's early, but mark the 27th on your calendar and be sure to pick up the album. In the meantime, why not break out Summerteeth or Yankee Hotel Foxtrot again. There's never a bad time to listen to a great album. 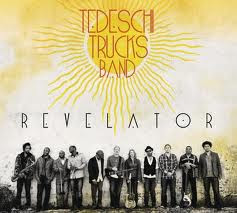 Friday night I had the pleasure of seeing "The Tedeschi Trucks Band" at The Riverside Theater in Milwaukee, WI. This super group consists of 11 of the finest musicians and artists including the husband and wife team of Derek Trucks (The Allman Brothers Band) and Susan Tedeschi. They’ve recently put aside their solo projects and have come together to form this amazing ensemble. What happens is pure magic!! The couple makes beautiful music together on the stage, that perhaps, only a couple can do. And the rest of the band wasn’t too shabby either. In addition to Tedeschi and Trucks, the band consists of Oteil Burbridge, Kofi Burbridge, Tyler Greenwell, J.J. Johnson, Mike Mattison, Mark Rivers, Kebbi Williams, Maurice Brown and Saunders Sermons who treated us to passionate bass, sax, trumpet and drum solos and 2 hours of music that covered blues, funk and soul. It’s exactly what a concert should be!!

They played songs from their new album “Revelator” that included “Bound For Glory”, “Come See About me”, and my favorite, which combines Trucks' sweet slide guitar with Tedeschi's bluesy vocals perfectly... “Midnight in Harlem”.

They also covered some of the greats with Joe Cocker’s “Space Captain”, Stevie Wonder's "Uptight (Everything's Alright)”, the Beatles’ “I’ve Got a Feeling” (WOOHOO!!!)

and really funked it up to end the night with Sly and the Family Stone's , "Sing a Simple Song" and "I Want to Take You Higher." There was boundless energy from the stage and from the crowd and nobody yelled at me for standing up and cutting a rug. That’s always a plus!

Taste It To See Who Made You

OK, I can take your criticism if you're going to tell me that we JUST shared 50's style music when Mookie told you about the Buddy Holly Rave On compilation album. I can take it, because I am really digging this album by the band Mister Heavenly, which also relies heavily on a 50's doo-wop sound.

Or rather, make that doom-wop. There are drums involved, after all.

This might be the only picture you can find of the band, since Google searches for "Mister Heavenly" pretty much just turn up a beanie-clad Michael Cera providing support on bass. I love how this photo almost hints at an identity crisis just as the bandmembers themselves and the songs on the album convey a bit of confusion as well.

The three main members of the band are also members of other bands. The drummer, in fact, is also the drummer for The Shins and for Modest Mouse. Out of Love moves from jivey Holly-esque to borderline psychobilly and then right back to milk-and-honeymoon swoon songs.

I still love it, though. I think it's what music needs today. Whut.