Laughing My F*ck!ng Head Off! 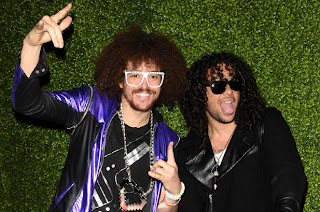 LMFAO is just two dudes from Los Angeles, California that like to make music and party! These two dudes go by the name RedFoo (Stefan Kendal Gordy) and SkyBlue (Skyler Husten Gordy). They are actually related. RedFoo is SkyBlu's uncle. RedFoo is the son of Motown founder Berry Gordy.

It's a great album, and just yesterday, it became the number one album in the U.S. of A. Here's another interesting fact about these regular dudes. By reaching No. 1, Stefan claims bragging rights over his older brother (by 11 years), Kennedy. Who is Kennedy? You know him as Rockwell, and if you remember, he peaked at No. 2 with "Somebody's Watching Me," in 1984.

How did this become the Number One song? Hard work? Talent? Yes, perhaps that's true...but the truth is a bit more shocking. Check out the video below.

I'm totally visualizing you hitting the Recommend button on this post. Then I see that I am getting an award for having the best music blog in the country. I'm counting piles of cash on my dining room table. My girlfriend is rubber banding them and stacking them into a giant pyramid that I will climb and proclaim that "all I see is MINE".

Let's listen to the hit single, shall we?

It's dope. It's catchy as shit. You might have stepped out of your cubicle to get yo Shuffle on. Right?

The official video is super cute. It's got 110 million views on YouTube, so you have probably already seen it...but just in case.. The premise is that Redfoo and Blu Sky wake up from a party-induced coma to find out the song "Party Rock Anthem" has turned everyone into dancing zombies a-la 28 Days Later. Look out for the gold head robot and your favorite savior for memorable appearances.