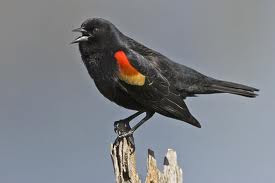 While out walking the other day, I had a blackbird hovering over my head. Normally I wouldn’t think anything of it, but 2 years ago I got blindsided and attacked in the back of the head by one. According to what I read, you’re supposed to bark like a dog to scare them off. So I put my knowledge to use and started barking in a loud, gruff bark. It did nothing to scare that bird, but I did embarrass myself in front of a bunch of strangers before I took off in a full sprint. I don’t know what it is with me and birds. I’ve been shit on by them 5 times in my life as well. My mom thinks that they think my hair is a nest. I do have quite the mop. I however, believe it is payback for not cleaning my parakeet’s cage as a child. The guilt still haunts me, as I have this reoccurring dream that the poor thing’s poop is piled up to it’s perch. Guess that’s why now I’m only allowed to have plants as pets.

The male Red-winged Blackbird really is beautiful and after I “out ran” it, and escaped another brutal attack, one of my favorite Beatles’ songs popped into my head. “Blackbird” is such a simple, catchy tune that always makes me tap my foot and break out into a whistle.

It’s been covered countless times and I’ve seen it performed live by numerous artists. One of my favorites being “The Dead”. This version is from Milwaukee 7/1/03. Just Weir and his guitar, before the band joins in for a little jam and then into “Foolish Heart”.

Even Neil Diamond takes a successful stab at his own version.

Of all the times I’ve heard this song, I never knew that actual meaning of the lyrics. I had my own interpretation in my head, but after researching the intended meaning, I’ve come to love the song even more.

According to Wiki, “Blackbird was written when Paul McCartney was just sitting while he had free time on a tour. Then he heard a women screaming and a lot of police cars pulled up. The police had her handcuffed and were beating her. There was a giant crowd. Paul thought the black women committed a huge crime. Turns out all she did was sit in the whites section. Paul was shocked, as there was no segregation in England. He decided to write a song. Notice how all the adjectives are bad: dead, dark, sunken, broken, and black. They describe the unfairness. The verbs show the actions of the black people: fly, singing, free, arise, waiting and see. After all those tragedies the African Americans didn't use violence. It was the lady's time to be free and arise from the dark black night. There is also the sound of a foot beating in the background. McCartney insisted they have it but couldn't do it himself so they actually used a metronome. Why? The footsteps represent the marching of all the African Americans.”

Simple tune it may be, but with some very profound lyrics. Thank you Mr. Blackbird for the near attack and causing me to do a little research and thank you even more to Lennon/McCartney for such a beautiful song!