the sound of fighting

In 2007 Battles blew a lot of people away with the release of Mirrored. They had released a few EPs prior to that but Mirrored was a new introduction for most folks, and an amazing one at that. 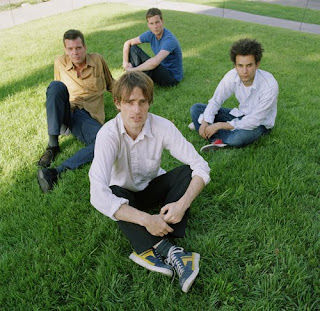 I went in thinking, members of Helmet and Don Caballero working together? This should be interesting. I had no idea how groundbreaking it would actually be. It took one listen to the single "Atlas" to make me realize. Take a listen now if you haven't heard it. In fact, listen again if you have. I'm setting a mood here.

It's bizarre but completely hypnotic and unique. The instruments are all on synced looping pedals so the band can build theme upon theme. It's a simple idea but one that hadn't really been examined so in-depth before. It works and it's very compelling. The rest of the album has the same appeal. You put it on and you're virtually guaranteed to sink into the pattern-based brilliance for an hour.
So here we are four years later and the band has been pretty quiet for a while. Late last year vocalist/instrumentalist Tyondai Braxton announced he was leaving the group to focus on his solo career. That left a lot of us wondering what would happen with the rest of the band. It turns out they continued forward with a somewhat modified sound and are releasing their second full-length Gloss Drop this week. Here's the opening track, "Africastle."

This album looks back to Battles' EP roots, with a mostly instrumental approach. There are a few songs with guest vocals but the focus here is on the music. That's not to say the vocals are incidental. For example, here's a track with Gary Numan (yes, THAT Gary Numan) covering those duties:

It works. The rest of the album ventures into something I wouldn't expect: world music. There are hints of Caribbean beats all over the place and the heavier mood of previous works is less present. This isn't a bad thing, it's just an interesting change. Perhaps it's because of Braxton's departure, perhaps this is where the band's next evolution was headed anyway. Regardless, it makes for a good album in a completely different way from anything else in the band's catalog.

If you were a huge fan of Battles' previous work and don't cope well with change, I'd leave this one alone. If, however, you want to see how a band can develop and adapt to change over time, this is a great example. I'll leave you with one more track because, um, why not?