Again I come across a band and album that I love only to discover that they have broken up already. Wild Sweet Orange, from Alabama, released We Have Cause To Be Uneasy in 2008. They announced their breakup September 2010. when did I discover them? March 30th, 2001. It's a bummer, but that should stop you from becoming a fan. Uneasy is such a great album, that it's worth the disappointment of knowing that there will be no other albums from this band. Who knows, the purchasing power of the fans of this bloog could resurrect the band with a reuinion tour and a new album. Stranger things have happened.

"House Of Regret" is a beautifully crafted rock song. The song starts off slow, sad and reflective. You can feel the remorse bubble over into anger through the course of the song. I play it at loud volumes, I suggest you do the same. 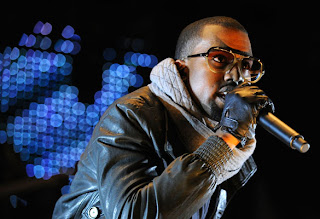 This is supposedly a bogus version of Kanye West's much speculated-about song Mama's Boyfriend. We had heard a capella versions of it when Kanye was doing rhymes at facebook and twitter headquarters. It was supposed to be on the album My Beautiful Dark Twisted Dark Fantasy, or as a Bonus Track. It was not released as either. Word was that the song meant so much to him that he wanted it to be perfect before it was released. Having it released the way it has was really fired Kanye up. Here is the note from the label about it:

The version of the Kanye West recording “Mama’s Boy” that arrived on blog sites earlier this week is entirely bogus and unsanctioned, and violates the artist’s creative intentions. As is often the unfortunate case, an unknown party or parties got a hold of Kanye West’s vocal track and added their own soundbed to it, effectively and falsely releasing it as a Kanye West track from the My Beautiful Dark Twisted Fantasy sessions. The result in no way resembles the final song Kanye West intended his fans to hear, and he is deeply disappointed that one of the most personal, meaningful and special songs he has ever written would reach people in this way. Needless to say, measures are being taken to identify and prosecute the persons responsible for leaking this material.

I'm too afraid to put it on my servers. Here is the link to download it from Mediafire. Hurry! won't be there long!

Italo Disco is something I haven't listened to for a long time. I used to throw some in my sets from time to time, back when I used to DJ regularly. Songs like this always remind me of my old buddy CB4.


Glass Candy is from Portland, Oregon. That voice you hear is vocalist Ida No and the music is produced by Johnny Jewel. The song comes off the EP "Feeling Without Touching."

I'm just glad that Kanye is really back after all the shame he had done almost a couple of months ago. Hopefully, he should focus more on honing his singing skills rather than meddling on other people's life! I wish him just the best! casino på nätet

when I used to DJ regularly. Songs like this always remind me of my old buddy CB4.
medical billing and coding

it was released. Having it released the way it has was really fired Kanye up.
India tours