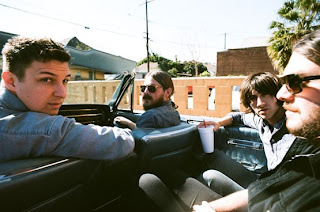 In an interview recently with Alex Turner (main songwriter and frontman) and Matt Helders (drummer) of the band Arctic Monkeys, they mentioned that they are not big fans of the popular folksy sound of Mumford & Sons. "Too many banjos", I think, the exact quote. It struck me as important, since Mumford have really polarized people. People are very passionate about the love or disdain for Mumford & Sons, never simply offering a "They are OK" comment. I've often felt that those who HATE Mumford, do so because of the constant rotation they seem to have on just about every radio station format here in the States. I wonder what people would think of Arctic Monkeys if they were always on the radio. Would the Arctic Monkeys even get light rotation on American radio? Sadly, I think the answer is no.

Post/Psychedelic Rock doesn't get many rotations on terrestrial radio. I, for one, wish it would. Radio isn't made for the likes of me. That's fine though, as the main reason I started this blog was to reach others like me. Maybe to at least convert as many people as possible, to bands NOT on the radio, is a more specific goal.

The latest Arctic Monkeys album was released on June 6th, but the band streamed the entire album from their website before the official release to allow fans to decide wether they wanted to buy it or not. The album title, Suck It And See, is not a fuck you to anyone in particular. I had thought it might be a message to the record label perhaps. The band has stated in interview that it is simply an offer, a suggestion of sorts. Try it, and you might like it.

If a band like Queens of the Stone Age is something you dig, you may find Suck It And See a nice companion album. Josh Homme is someone these chilly monkeys have worked with before. There are two main elements that stand out on Suck It And See: the guitar textures and the rich visual imagery of the lyrical content. On every one of the 12 tracks, these two aspects will leave you pretty satisfied. My favorite track, and the track the band is most excited to play while on tour, is "Brick By Brick".

If you are already a fan of the Arctic Monkeys, you will notice the continued departure from the sound that shot them to stardom. I think the change makes sense. It's a sound that's more accessible and sustainable. The album, overall, is well-rounded and consistent, and sure to please any rock music aficionado. It's more tortoise than hare, to make an analogy. The band has a hard enough time even remembering the words to their old material while on tour, so continuing to evolve their craft makes the most sense!

The band will be in Vegas this year (9/24/2011), that's not a show I will be missing. Check this link to see if they might be somewhere you are.


Check out the video below for some insights on the new album. Don't worry, they are not stoned or drunk, that's just how the sound in every interview I've ever seen. (I suppose they could ALWAYS be high...)

Email ThisBlogThis!Share to TwitterShare to FacebookShare to Pinterest
Labels: Arctic Monkeys, English Bands, Mumford and Sons, Suck It And See