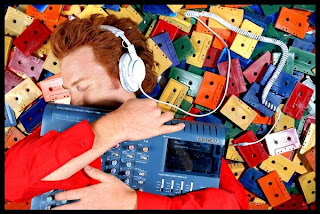 Rafter has a new album out entitled Animal Feelings. It's a pop album that you don't have to feel dirty for liking. There will never be anyone lashing out at you for liking this album. It's the kind of Pop album that gets you "street cred" with the hipsters. If you would rather stick a pitchfork into the lower orifice of a hipster, then at least you will seem super cutting edge to your normal friends.

Rafter Roberts grew up in Sebastopol, California, where his parents raised him in a decidedly nontraditional setting. "My parents named me Rafter," he told LAS magazine. "I don't know if I want to call them 'hippies' but they were definitely counterculture and outside the norm. When my mom was pregnant with me one of the people they lived with in this semi-commune made a joke that they should name the baby Rafter because he was conceived in a loft. And it just sorta stuck."

There are so many great songs on this album, I've had a hard time picking one to share on this post. In the end I decided on "A Frame" because I think the first verse speaks to me. An A-frame is the most basic of structures to support load. I prefer to roll the opposite of deep. I roll sparse. I roll super sparse homie.

Bombay Bicycle Club
I'm constantly battling my gianormous music libraries. Yes. Plural. Across four different computers, I struggle to consolidate to just one. Well two. One library is EVERYTHING except what's in the smaller one. The smaller one is just dance music, mashups, and remixes. It's the library Serato pulls from that I DJ with. It's a messy sitch. While moving music around my home network, I come across some old gems. The gem was the album I Had The Blues But I Shook Them Loose by Bombay Bicycle Club from 2009.  A real oldie...I know. It's probably something that I haven't really listened to since 2009, and I regret that. This is a fantastic album that I hope you pick up and love. It's going on my iPhone right now. Check out the track "Always Like This" to get a real feel for the whole album. If you like that track you will love the whole record.

The other thing I struggle to keep organized, besides my music library, is the blog inbox. Fucking overwhelmed. I need an intern. Or two. Not the Monica Lewinsky type either...I can barely keep up with my girlfriend as it is.

This last track will have to be from the digital mail piles. It's from the Salt Lake City garage pop band The Devil's Whale upcoming album Teeth. Check out the single "Standing Stones" and then head to the bands bandcamp site to order the album for $8.99. I think you will dig the surf sounds that must be inspired by some nearby saltwater source...