So Osama bin Laden is dead. That much we've figured out. Here's the problem. We have pretty much shown the world we're not above everyone else when it came to our reaction. The fans in Philadelphia at the Mets/Phillies game started a "USA! USA!" chant. The website Philly Gameday had one of the best titles on the reaction by fans. 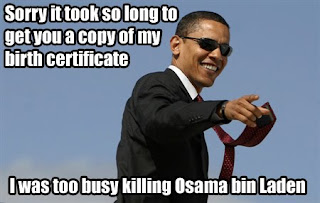 Now, while I may not go into such a cynical look into the reaction, I did find it funny. And honestly? There's a lot of truth to it. Personally, I'm torn with how to react. I am sure many out there feel the same way as I do. We, however, are in that silent majority. The dum-dums pulling the boorish chants and those already fueling conspiracy theories over the lack of a photo are getting the attention. If you're one of those people in the latter camp? While I respect your right to openly say such things, you need to know that you're in the minority. It's not an effort to silence your voice. It's a good debate to open up, and I respect that. However, I take issue with such a stance, and I am going to detail why here.

Before I go on with all of this, I do have to say that I am extremely anti-war. I watched the effects war had on my own father's mind and witnessed firsthand the effects it had on others that he knew. Violence begets violence. It's an endless cycle that can be stopped, even if temporarily. You see, I am not an absolutist when it comes to my pacifism. I understand that violence is ingrained in us. Greed and many other human failings will lead to such devolved behavior. Now, to my points.

First of all, it's unfortunately an idea that has more conjecture than truth to it. The notion that the government hides behind secrecy has been around for far longer than any of us. The unexplained always leads to such rhetoric. I personally did not witness the Crusades, so does that mean it never happened? No. We use reason and logic to filter out the information we find irrelevant and make a decision on what our version of truth is. Because my father was a man that served in wartime, I unfortunately heard the stories of what he did in Vietnam. The difference between then and now is massive, but the ideas behind how the whole series of events remains the same.

In years past, the military has handled such operations in much the same way. Get in. Get out. If you had a target, you killed said target. Pictures and more are certainly taken. They were in the past. I can guarantee you that. Take the assassination of Diem in the early days of Vietnam. Floating around somewhere are pictures. Since we live in an age of instant gratification, we somehow expect to be treated to some semblance of indulgence when it comes to pictures of a dead bin Laden. It simply does not work that way. Maybe it's our government lacking in the times when it comes to the understanding of its constituency. My thinking is that it's an unreasonable request by a small percentage of people that will likely still have doubt when said photos are released.

To those people that want to follow the purported "logic" of those like Alex Jones, I say best of luck to you. The majority of us aren't drinking the Kool-Aid. We understand that our government would stand to lose a lot more by lying to us all in this instance. The scrutiny that this event would receive was expected by our government. They handled it properly, and when they do decide to release photos, they will. However, it likely won't please those ranting about the secrecy. What will happen is that we'll then hear the incessant whining about why it "took so long" and then hear from quacks that claim to be photo-editing experts. Just watch. I know that will happen.

As for those that chose the boorish route by cheering and partying? What exactly does that accomplish? Nothing. It instantly reminded me of the celebrations we saw on TV that many people in Islamic countries had after 9/11. The similarities really don't end there, though. The one other major similarity is that you are also in the minority when it comes to the celebrations. Most Muslims condemned the attack on our soil. Even Hezbollah - now on the US terrorism group list - condemned the atrocities committed by al Qaeda. The celebrations we saw on TV by Americans was, no doubt, simply a minority of those in our country. Most felt more a sense of relief. Others felt a sense of closure, most notably those that lost loved ones in the attacks.

So what is the right response? I would say to simply think of those that lost friends and family on 9/11, as this could have possibly re-opened the mental wounds. Be supportive of those people. Claiming superiority over others due to one man's death is lacking the humility we should be showing. The same goes for those requesting proof. I don't say you should buy into everything you hear, but to use some reason and have some sensitivity when it comes to the aforementioned group that are still mourning. Your actions are a disservice not only to those people, but also to the troops you so desperately want to come home and support without question. It's a slap in the face to the hard work they've done to try to bring an end to what we've dealt with for close to ten years. The idea is a simple one - respect. Please have some.