This week we got a nice little present from one of my favorite bands, Boris. That present came in the form of two albums, released in tandem on Tuesday. 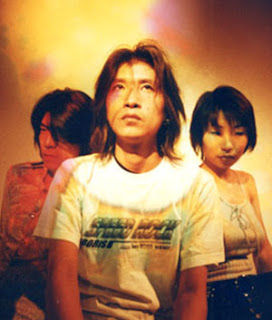 Boris, for those of you unfamiliar, is a Japanese three-piece. They started out as a drone-y metal band and still work with that idea a lot, but they are equally adept at crossing genres like punk, post-rock, psychedelic rock, and more. Every album they've released, and they have 17 full-lengths at last count, has been an opportunity for experimentation and growth. No two albums sound a whole lot alike, but I can't say there's a bad one in the bunch. A few releases, such as 2006's Pink, have made big waves in the critical community as well. Don't take that as a bad thing. This is one time the critics are right on.

The new releases are named Attention Please and Heavy Rocks. The latter is also the title of a 2002 release by the band, so be aware which album you're getting. If you're interested in the band's earlier sound the 2002 album is a good place to start. If you already know the group or want to see where they are now, pick up the newer one.

Heavy Rocks sounds a lot like the title implies. It's a brutal, heavy album more along the lines of previous Boris releases. This is the sound of a band that took their name from a Melvins song title and pushed the idea forward into psychedelic punk. Here's a track from the album to explain what I mean:

In stark contrast, Attention Please is a restrained album that focuses more on songwriting and textures. This is the first time female band member Wata has carried the vocals for a full record, and it creates a striking effect. It's amazing to hear this alongside Heavy Rocks and think it's the same band. That's part of the beauty of Boris. Here's the title track from the album:

For what it's worth, my favorite Boris moments are the times when they play in the punk/thrash realm. As an example, here's the track "Statement" from the 2008 album Smile:

I don't say this kind of thing often, but that song rocks my ass off.

Even if you're not a fan of heavier music, give Boris a listen. You may just find an album you like in their extensive catalog. Oh, and I hear their live show is something to behold. I haven't had a chance to catch them in person but it's high on the list.