Recently, I was graciously invited to contribute to this wonderful blog and could not have been more excited. A self-proclaimed music junkie who has failed at playing the guitar and has a voice that only a mother could love, my voice now is sharing thoughts on music that moves me and hopefully moves you as well. My taste varies and through my posts I hope to introduce you to some great new music or maybe take you on a trip down memory lane.
My recent adventure in music was much more successful than the guitar lessons and came when I was the music supervisor on the indie film NONAMES. There's nothing more satisfying than pairing great music with a great film to complete the total package. With a small budget I was forced to find artists who were perhaps not well known, but fit the tone of the film. What you get after countless hours of scouring the internet until your ears are bleeding, is a damn good soundtrack that can be heard at www.nonamesthefilm.com.
So that's a little bit about me. And now, on with the show.... 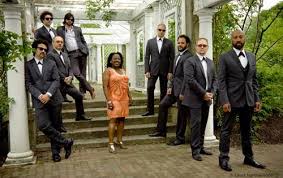 So, what do you get when you cross Tina Turner and James Brown? The answer... Ms. Sharon Jones. Early last week I saw Sharon Jones & The Dap-Kings for the first time in Madison, WI and was transformed into a dancing machine. That’s saying a lot coming from the girl who took tap lessons (kinda like the guitar lessons) for one day. However, Jones’ energy and storytelling paired with some awesome music, made it impossible to sit still and not shake what your mama gave ya. Well, there were those couple people who complained multiple times to my friend that he was blocking their view. It’s a concert, if you want to sit, buy the DVD and watch it at home!

Backed by the 8-piece Dap-Kings (including guitarist and emcee for the evening, Binky Griptite who hails from Milwaukee, WI) and 2 Dapettes, the nearly 2 hour show did not lack entertainment, fine musicianship or amazing vocals. Wearing a fringe covered mini-dress (which had the men hooting and hollering and the women hoping they look that good at 55 or wondering why they don’t look that good now), Jones created her own version of “Soul Train” when she invited a group of women on stage with her to showcase their own moves. (I didn’t make the cut) She also pulled 2 young men on stage who are probably still asking themselves what happened, after she seduced them with her vocals and sultry moves. One of the greatest songs she performed was "This Land is Your Land", a Woody Guthrie cover from the film "Up In The Air." You may have also heard this song featured on NPR.

Jones has been on the music scene since 1996, but that song gained she and the Dap-Kings more popularity since the release of the film. Some of my favorites from the Madison show include...“100 Days, 100 Nights”, “Better Things”, “I Learned the Hard Way”, and “Mama Don’t Like My Man”. However, I do have to say there was not one song I didn’t enjoy. On tour through August in a city near you, SJDK is a must see show. Their old school soul sound and look created one of the best live shows I have seen in a long time, with never a dull moment. As a matter of fact, I woke up at 4:45 the next morning with the songs replaying in my head and anybody who knows me, knows there's not much that gets me up at that hour. Warning, if you do attend a show, wear comfortable shoes. Unless you plan on being a stick in the mud and sitting the whole time. Then bring your seat cushion.

Email ThisBlogThis!Share to TwitterShare to FacebookShare to Pinterest
Labels: 100 days, james brown, nonames, sharon jones, the dap kings, this land is your land woody guthrie cover, tina turner, up in the air soundtrack

THANKS for the introduction to an amazing soul artist in my own backyard. Certainly leaves me wondering how I've missed catching her before but thanks to your review I definitely will in the near future.