Hell May Not Dwell on the Dead 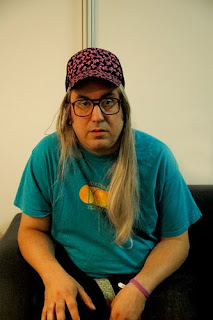 J Mascis of Dinosaur Jr has released his first solo studio record. The record is almost entirely acoustic and is beautifully designed. To me, it's the album that had been kept inside since 1994's "Feel the Pain." It's more raw sharing, but this time, in a bit of peace and quiet. Or if you never realized how much pain and heartache was in all those Dino albums, this one can retrospectively shine a light for you.

Several Shades of Why is a collection of ten fragile, contemplative tracks that serve as reminders of the unknown we face on all fronts in life and love.

Track five cheats and sneaks in a bit of electric guitar.

The backup vocals on this track are supplied by Ben Bridwell of Band of Horses. Other contributers to the album include Kurt Vile, Paul Jenkins, Kevin Drew, Suzanne Thorpe, Sophie Trudeau, and two other guitarists.

As for his intuitive and self-aware lyrics, he says he sometimes writes from the other person's point of view. "People’s frustrations with me. I know why they’re frustrated with me, but there’s not much I can do about it." I like to think the title track is a distorted, disembodied mix between a two-way conversation, an inner monologue, and the perceived inner monologue of another.

Click to Enjoy J Mascis - Several Shades of Why