Music should still be tangible 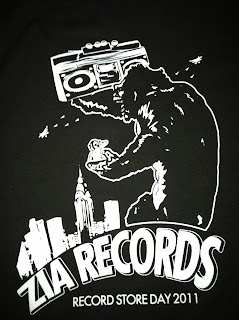 Record Store Day is an internationally celebrated day observed the third Saturday of April each year. Its concept is to celebrate the art of music! The day brings together fans, artists, and the over 700 independently owned record stores in the U.S., along with hundreds of independent record stores around the world.


I was horribly hungover this morning after an amazing evening watching Mumford & Sons at the Cosmopolitan Boulevard Pool. I drank two glasses of water and dragged myself to my car and headed out to the ONLY place it makes sense to celebrate Record Store Day.


The only record store I go to in Las Vegas is Zia Records. I could go to a Best Buy or a Target to buy my media, and in a pinch I will, but if I can help it, I always try to make those purchases at Zia.

As soon as I walked into the store, I am greeted with some great deals to celebrate the special day! For $3 I could get a commemorative t-shirt to remember the day (and look uber cool) and a stack of vinyl in a secret grab bag. I couldn't pass that up so I threw the shirt over my shoulder, stuffed the grab bag under my arm, and walked further in to the store.

I then headed to the new releases wall to grab the new Thursday CD No Devolución. I'd heard that the band has moved away from its Post-Hardcore sound on this album, and I was anxious to hear what they sound like now. Luckily enough, it was on sale for $12.99!

I continued walking around the store, looking for a Record Store Day exclusive I had heard was to be available from the band Manchester Orchestra. I was looking for the "Simple Math" 7" vinyl, featuring a cover of Built To Spill's The Plan. None of the Zia employees knew what I was talking about, and it was so slammed that they could only point me in the direction of where all the special RSD releases would be.
I checked all the RSD endcaps, but didn't find what I was looking for, but I did find something else I wanted!
In honor of Record Store Day, the hip-hop label Rhymesayers Entertainment had released a picture disc vinyl with unreleased tracks from Atmosphere, Blueprint, Grieves, and a few others! It also came with a cool sticker and a digital download card so that I could also get the MP3's! That's a win, and you know that went under the arm as well!
I took my merch to the counter, paid, and bounced back to the ride.
Once home, my first goal was to unwrap the grab bag of vinyl and see what gems and/or garbage I had in my package. 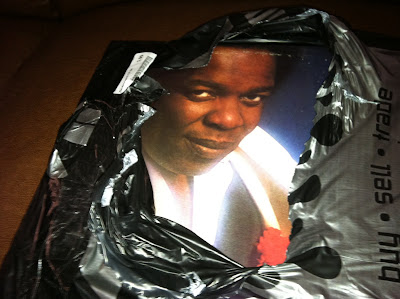 Very sweet! That's not all though! Also in the grab bag was Jerry Riopelle's Saving Grace, David Becker Tribune's Siberian Express, Ronnie Milsap's Milsap Magic, Kenny Rogers' Love Lifted Me, and a still sealed Christmas carol album from 1969 as well as a few other random pieces.


One, which I think is kind of interesting, is John Stewart's Bombs Away Dream Babies, which features Stevie Nicks on a few songs. One of those songs is "Gold," which you can listen to below.


Next I opened my new Thursday CD. Threw it into the Macbook and started the first track, "First To The End" and went searching the interwebs for the skinny on this new album and new sound.


I found this summation of the album from Thursday frontman Geoff Rickly:


There's a lot of breakup records out there that only address the end of relationships, and I think the theme of devotion doesn't get explored that often. If devotion is the theme, the new record is a prism that's being used to refract all of its different aspects.

It appears to be true, the rumors? Thursday's sixth studio album, No Devolución, is not a screamo hardcore album. It's got actual singing. It's dark and mysterious and filled with reverb and atmospheric swells of sound. Rickly even overdubbed some of the vocals in the middle of a forest near the studio. That's one way of doing things differently. There is a lingering of that old Thursday on the album. "Past and Future Ruins" might be that perfect song that blends the old  Thursday with the current one. Check it out below.

The best thing I grabbed today was the 12" picture disc from Rhymesayers. This record only had a pressing of 1000 copies (mine was numbered 947). The design on the record was created by Ohio artist Chris Gliebe. The highlight of the music on the record comes from rapper Grieves and produced by Budo. Budo, otherwise known as Josh Karp, is the real mastermind of this duo. He's had a formal study of Trumpet and music theory, but his love for music had Karp branching out to any instruments he could get his hands on. The track "Got's To Go" features some amazing guitar and synth work that adds some heaviness to the quick flow that Grieves lays down. Peep these lyrics from the start of the track.


Everybody's got a dark side to the force / Something violent inside em, that makes em wage a war / Picking the pieces up off the floor / the frame fell off our picture perfect amore, damn

All in all, this was a great Record Store Day! I hope you got out to a record store on Saturday, and if you didn't, please...head down now. They will be happy to see you, and be sure to mark the date of April 21 for RSD 2012!