But for today, I will just talk about the rebuilding and the losses I sustain via my iTunes. Yes, I have said it nine and a half times in this blog. But I am going to say it again. I was listening to the new Thursday album, and I thought, doesn't this sound like Deftones? Let's pull up some Deftones and... what? Am I spelling it right? Shit. What happened to my Deftones? 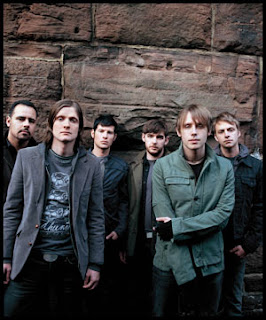 And for that matter, this is Thursday I am listening to? I thought it was some random new band I was discovering, called No Devoluciòn. Ah, shit. I'm not qualified to review Thursday, am I? I literally have no idea who they are. OK I have an idea. One idea. They're that band. That band that kid was going to see, or maybe they were opening for that band that kid was going to see, who was going to play all their albums. And I thought the name of the band Thursday was actually named November. Yep. That's all the history on this band I am giving you. I am not going to pretend to know their roots, and I am not going to reWikitate stats for you.

Mayday, ground control to no one
Empty the seats and put away the maps
You've been away past the far horizons

There is someone else they sound like, but I can't put my finger on it. In the opening track for this, the 6th studio album, No Devoluciòn, they are sounding a bit like Lovedrug. This album will travel back and forth between Lovedrug, Smashing Pumpkins, Deftones, and Chiodos.

Screaming from a stage or at a pay-phone in the rain
Trying to find the words I always think I need to say
Please, bring it back to the moment before you left
I never felt the sting.
The louder the ring, the less the thing.

Click to Enjoy Thursday - A Gun In The First Act

Then there are the times you think you are going to lose something, so you grasp too desperately at it. And make it wish it were lost.

You'll probably never get it right. That's all I've got for you.

Kid, you need some thicker skin,
You don't take punches well.
You're just like your old man
But you're young and scared.
You're weak in your beliefs
And you've got so much to prove
And not a lot of time
Before they get to you.

Disregard those clapping hands.
They'll turn to punches when you're down.
Disregard the critics' praise.
They'll be the first to tell the news
That you've sold your soul.
Disregard those dollar signs.
They'll buy the biggest house in hell
Where you'll live alone.
Just keep your head down,
Keep your friends close,
Hold fast to your beliefs
And, whatever else you do,
Stay True.