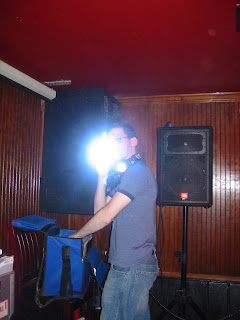 I had this urge to go find a song the other day. When I start looking? I get the damn song. I mean it. Well, this is not the most exciting post. I give you that much. It is a great song, and at least there's a story behind it. You see, I think some folks here know I DJed. And I don't mean this half-assed way where guys look at a computer screen and "DJ". No. Vinyl. And it took a long while for me to even become any good at it. Granted, I was playing around at home for probably an average of five to six hours a day for the first six months, but it didn't come easy. It's something to say I'm proud I learned how to do.

Well, this song is actually one of the first I picked up on vinyl. Now, when I bought my turntables back in early 2001 - which I still have, by the way - the kid I bought them from also gave me about 20-30 pieces of wax. Some of it I never touched. This one, I used to practice with all the time. And for some reason, it gave me fits. So I would stop. Start. Try mixing again. And fuck up again. It's not a difficult track to play, in retrospect. Who knows why I had so much difficulty with it. Perhaps the other ambient sounds in the track confused me. Perhaps my sound system to use as a monitor speaker were crap - and they were. Bottom line is, I learned how to do it.

And I have to say, I don't think I ever played this song out at a gig, which is a shame, because I love it so much. I looked for this version for a couple of days. The dub version just isn't the same. Yet it was all I could find. I did find the vocal mix, and I give it to you here. The track? "South Side" by Moby, and this is the Pete Heller Park Lane Vocal mix. I don't know what it is about this mix I love so much, but maybe that's a good thing. I simply love it. Now I pass it along to you guys!