You Get Taken All The Time For A Fool

Rolling Stone said we would want to slit our wrists if we missed The Strokes. Well, they said something like that. If a band whose shit you like takes a five year hiatus, and then is performing in only one spot on your continent for the foreseeable future, would you not try to go to that show?
And if that show was scheduled in YOUR TOWN in a BRAND NEW SWANK-ASS PLACE... You would buy the tickets. Or tell your boyfriend to buy the tickets, if that's how you roll.

It appeared at the time that they were taking off for Europe and Asia after playing one show at The Cosmopolitan in Las Vegas. Was it planned that way to build hysteria for Vegas' newest super-resort?   Here I find out they just played SXSW. Fuck them. Now they are scheduled for Coachella, Bonnaroo, and a bunch of other shit. Great. I hope the entire western hemisphere is happy they crowded into a HOTEL BALLROOM to make my first experience seeing The Strokes live as shitty as humanly possible.

I think a few years ago I tweeted that "If I ever go on Dancing With the Housewives I want to dance the quickstep to "Last Night" by The Strokes." I used to love their music that much. The rest of their fans have made me hate them.
And I don't say that lightly. I do not claim to be the original fan shitting on the nouveau fans. I am like the 25-year-old Emo kid who shows up to a Fall Out Boy concert without realizing that 96% of their fans are screaming teenage girls. Decibel-shattering screaming teenage girls. Oh, my bad. I didn't know this was your thing. I'm out.

The shattered decibels at this show were due to bad sound mixing, rather than fans. Maybe the fans were screaming. I don't know. Mostly they looked like they were trying too hard to get into an exclusive club. You had diversity and then some at that show. Girls in ridiculous sequinned craziness. Boys who looked like inner-city drug dealers. Emo boys. Douchebag boys. Jersey Shore wannabes. Punks. Middle-aged music snobs. Everything. But with no crowd unity. I am a tribe runner. I go to a lot of shows. I enjoy my fellow crowd mates. This was awful.

And so we waited with these assholes. And waited. And waited. The ballroom's box office has no idea what they are doing. You're supposed to know set times a couple of hours before the show starts. The girl on the phone basically guessed at set times for me. And guessed wrong. The Strokes finally took the stage at 11 PM at a one-opener event with doors at 8 PM. Tell me just how the fuck that happens. Perhaps it's because the bathrooms are half a block away? Perhaps it's because they need to make sure you load up on as many twelve dollar drinks as possible? 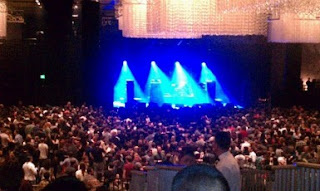 Until The Chelsea ballroom is actually turned into The Chelsea Theater, SKIP any event held there. I am serious. You see those crystal things hanging?  Yes.  They are BALLROOM CHANDELIERS.  The bodies you see before you are the General Admission patrons, and behind them are risers with chairs.  God.  Awful. We can stand loud music.  We can stand face-meltingly loud music.  We can stand floor shaking.  This was just bad, bad mixing.  Apparently they played 19 songs.  We had to leave after two and a half.  Then as we drove The Strip in front of the hotel, we were treated to perfect sound and a big screen of the show live.  Shit.  Settle for the sidewalk show if your favorite band is insane enough to play here.

The album is OK.  I like the song "Taken For A Fool".  Everything else sounds just like it was recorded, and practically like that live show felt:  in pieces.  Scattered.  Uncoordinated.

Click to Enjoy The Strokes - Taken For A Fool