Set My Soul At Ease

It was during season 14 of Saturday Night Live that I first heard of Edie Brickell. I watched every episode religiously that year, so that I could return on Monday to the first of many Algebra classes I had failed and re-hash the entire episode with Mike Popowski. We would roll in the aisles laughing about Giant Business Man, Church Chat, Girl Watchers, Sweeney Sisters, The Anal Retentive Chef, Hans and Franz, Pat Stevens, eventually Wayne's World, then to close out the season the sketch that would absolutely kill - Toonces! Then there were the "commercials." The Change Bank. I have always loved this one. We can handle requests like that; usually the same day. 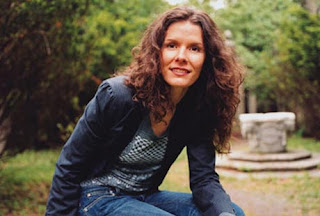 So when this mousy girl from Texas got up and started singing strung-together existential silliness in the song "What I Am", I just wasn't sure how to react at first! I joked about it at school. But I looked further and I kind of got into folk sensation Edie Brickell and New Bohemians.

SNL has played a major role in Brickell's life, since it was during her performance on the show two years later that she met her future husband, Paul Simon. Literally, she was performing a song, he got in the way of the camera, she flubbed her lyric, and then the two were married two years later in 1992. Following this union, they had three children, Brickell released two solo albums, and then reunited with the New Bohemians to record another album. After that Edie and Paul's son from his first marriage formed a band called The Heavy Circles with a few other famous children. She formed another band with yet more artists last year. The indie and folk flow and creativity that must be going through this woman's life at all times... Speaking of Bohemian!

So here we are in 2011, and we have a new album not only from Edie Brickell but also from The Gaddabouts, her most recent formation.  Brickell writes a lot of songs on the fly - some get written and recorded the same day - and to keep the sound of her latest solo album pure and organic, she has included several live tracks.  It's not that she tours, but she does perform live shows here and there.  She opened for one of our favorites, Iron and Wine.

Maybe one of the cleanest, sweetest songs on Brickell's latest release (self titled) is Track 3, "Been So Good."

Don't forget you're the best one that I've ever known.


Grab the album. Edie Brickell is a talented musician who isn't always around when you expect her.