Click to play Lea Lu - Intro (So Jazzy I Could Cry)

I heard that song and I fell in love. It's jazzy yet fun, and the lyrics are witty in a geeky musician kind of way. The voice that rises above it all is Lea Lu, a Swiss singer/songwriter who I happened across in my journeys around the wonderful mess we call The Web. No, not Lykke Li, not Lucy Liu, and not even everyone's favorite Teletubbie, Laa-Laa. It's Lea Lu. 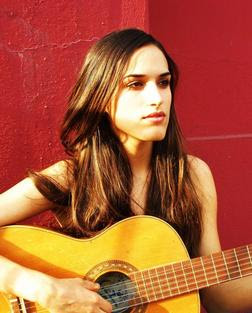 Lu's new album, Colours will be available April 5th so I wanted to give you a chance to get to know her before that happens. Her songs are folky, always centering around an acoustic guitar, but she sneaks in some very heavy Brazilian Jazz influences. Think "The Girl From Ipanema" with a more pop-based twist and a bit sillier sense of humor. Here's a fun little song called "Tucataca Song."

Lu also has some very introspective tracks on the album. She's often understated and haunting, in a way that coincidentally reminds me of Lisa Loeb. That's not a bad thing in any way.

All in all Colours is a solid album. It's a good listen and is just the kind of thing to put on in the background while you're hanging out with friends discussing the diversification of your stock portfolios, or whatever it is kids discuss when they're hanging out these days.

I wish I could tell you more about the artist herself but my German is nicht so gut these days, and that's pretty much what you get when you visit her official site and most sites about her. That's alright, her music speaks volumes and I will be on the lookout for her in the future. And now I'll frame this post just like her album, between her intro and outro tracks.