Is it me you're looking for?

Perhaps the really provocative area for future development lies... in cyborg rock; not the wholehearted embrace of Techno's methodology, but some kind of interface between real time, hands-on playing and the use of digital effects and enhancement.

Post-rock is made up of guitars like a regular rock band, but processed through so many filters and effect pedals that it barely sounds like a guitar on the other side of the speaker. Bands of this genre also tend to rebel against the norms of rock bands. Macho posturing and power chords are replaced by lengthy, textural instrumentals and often computers playing a part in the sound of the music. 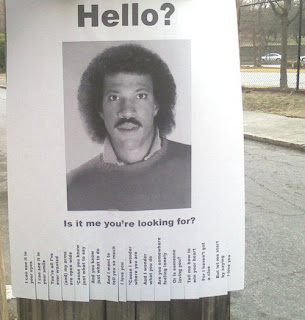 Mogwai's style could easily be called shoegazing or Math Rock and occasionally instrumental metal. These are all genres that can fall under the heading Post-Rock. Mogwai is at the forefront of the genre and moving it forward with confidence and purpose.

Let's listen to some Post-Rock shall we? ...and before the title of the track throws you completely for a loop, I'll mention that the band often has a hard time with titles since most of the songs are just instrumentals. The band has said in the FAQ off their website that they sometimes just use strings of words they have "said or seen that sounds good or makes us laugh".

Here is the closing track from Mogwai's seventh album, Hardcore Will Never Die, But You Will (released 2/14/2011).

The song starts off almost as something from the score of a movie. Cinematic and shimmering we hear some vocal samples (I'm assuming they are Scottish) that really frame a picture in your head. The song simmers for 4 minutes until the heaviness sets in. The bass comes in like an oppressive force of nature. All the members of the band painting pictures in your ear.

Barry Burns once stated in an interview with Chillville that he and the rest of the band do not like the categorization of Post-Rock because he believes "it overanalyses everything." I get it. No one wants to be so easily put into a box, forever feeling limited by the parameters of said box. But the thing is... To explain music to others, we sometimes have to put boxes around it, even if they're just made with pencil.