If You Pull Me Apart Don't Swallow My Heart

Early one morning (read: as in, the gaudy tramp stamp *above* the butt-crack of dawn), I was seized with a desire to listen to some music that was going to make me happy.
I reached one hand out from under the covers and grabbed for my iTouch. I opened the "Remote" app and started my computer's iTunes from bed. I played some Starlight Mints for what I thought was the first time. I thought I had never heard of them before. 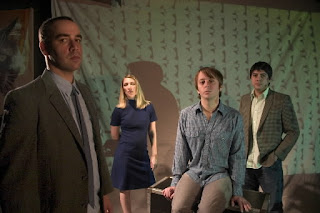 The name of the album was what was so intriguing to me, since it's inspired by perhaps my favorite Shakespeare quote. The Dream That Stuff Was Made Of is the first album from Oklahoma indie/psych pop band Starlight Mints. This album makes me happy from beginning to end. Beginning to end! I curled up all nice and content and listened with a smile on my face.
I don't know if I've heard it before. It's ten years old, after all. It feels like home. Yes, it's full of synth, full of clanging, a mix of Pixies and Violent Femmes-style vocalizing, and various forms of crafting and tweaking. And orchestra music. And cartoon music. I love it so.
I think one of the songs on this 2000 album that best represents what they're doing here, but still ventures further out from any "mold" they might have created, is super-deep in: Track 11, "Margarita."

Listen. There's no tour scheduled. There's no new album. They haven't logged in to MySpace since December. Maybe I shouldn't be promoting them to you. But this is good stuff, and if you haven't heard it, you need to.
They aren't a one-hit show. After Dreams, they recorded three more albums every few years. By all accounts, they are currently just relocating and taking care of other life kind of stuff right now. You have to truly appreciate that in a good artist. So when they return, or when you see them on the OutsideLands or FrollaChella lineup, you will know who they are and you can tell all your friends how you totally have to go see them.
The last album released was 2009's Change Remains, still full of surprises and experiments.  Check out "40 Fingers", then buy the stuff and get ready.