I need a devil to warm up my heart

It sounded familiar to me, but I just couldn't place it. The Little One and I had been watching a little TV, when the trailer came on during a commercial break. Right before the two minute mark is what I'm talking about.

I knew that song. Couldn't place the artist. I put T.L.O. on the case. She can get the answer to any question. She's my own private Google, that girl. Except way hotter than Google. She puts the boobs in G(*)(*)gle. Um... What was my point again? 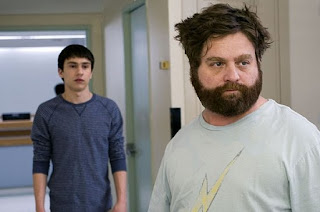 "Who are you disagreeing with?" I respond.

I know it's a mistake, but the word spills past my lips. "What?"

She lets out a sad sigh and looks me in the eye. "That's who sings that song. Ida Maria."

"Oh!" I respond excitedly, "I wonder if I have that album already."

I grab my iPhone and open the Remote app to scan the artists in my music library. I come up with no hits in my library. I quickly switch to Evernote to add an entry to my shopping list of CDs.

The next morning, after previewing two albums from the band, I buy Ida Maria's (actually pronounced E-dah) entire discography. Don't worry... it was only two albums! The first album, Fortress 'Round My Heart was released in 2008. The second album, Katla, was released early November, 2010.

Below is the full track used in the trailer. It's called "Oh My God" and is from Ida Maria's first album Fortress.

I'm sure I first heard this song on Hypem.com's Popular list years ago around the time it came out. Not sure why I didn't pull the trigger on this album then, but I'm glad it's in my collection now.

Fortress 'Round My Heart is a bluesy pop/rock album that has some moments of fun friskiness. Songs like "Louie" and "I Like You So Much Better When You're Naked" are as fun and filling as a grape pixie stix. Mostly though, this album has a very somber message. Imagine a heart symbolized as a piece of paper. Imagine that piece of paper being ripped in two. Then take these torn pages of love, and add Whiskey and Rock N' Roll. That's what you get for the remainder of the album in songs like "Forgive Me" and "Drive Away My Heart".

With the latest album, Katla, it's more of the same. Just much more aggressive in its focus. It's Fortress with a sniper scope. Katla is a massive volcano in Iceland near the infamous Eyjafjallajokull volcano that clogged Europe airspace with ash for 5 full days. If Katla were to fully unleash its fury, it's estimated to be 10 times bigger and stronger than Eyjafjallajokull. Just as Katla is 10 times bigger and badder than Fortress.

The track "Devil" blew my mind like a volcano. It's dark and thick, and might actually allow demons entry into your home. My the end of the track I was in a trance, snapping out of it long enough to hit the repeat button.

Yup. That's the sonic equivalent of opening a Pandora's Box contained in a 9:47 song.

I haven't seen the Galifinakis flick by the way. I really might see it just for the Indie-leaning feel the soundtrack seems to have. Seems like there are a slew of movies that are using Indie-ish artists in their soundtrack. A practice that probably traces back to the movie Little Miss Sunshine and the soundtrack that heavily featured indie folk punk artists DeVotchKa.