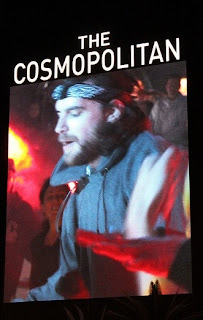 Girl Talk, aka Greg Gillis, just wrapped up 48 live shows where he would get on stage, play, mix, splice, and drop samples at a frenetic pace, sweat his ass off, and inspire the masses to dance their asses off.

Greg Gillis applies just as much micro-management and analytic skills that he once applied to his trained field in biomedical engineering, to the intricate weaving and grafting of upwards of 35 samples in one track.  Mookie explained just how many samples are used when he reviewed the latest Girl Talk album, All Day, back in November.

You may have noticed two weeks ago when I shat upon the Strokes show that we saw at Las Vegas' Cosmopolitan. We didn't know what to expect when getting ready to see Girl Talk at the same hotel. Different venue, but who knew if the same standards for sound and management applied out at the Boulevard Pool as apparently did inside at the Chelsea ballroom? And were we to be standing around the pool? Near the pool? Las Vegas, and this blog, is not stranger to an outdoor pool concert. The space for the Boulevard Pool, at least in the pictures released up to that point, seemed a little more confined. 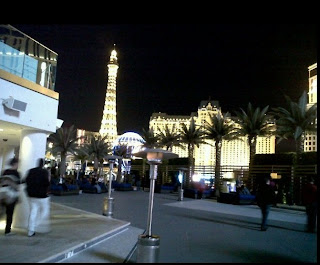 The Boulevard Pool is the New Standard in wet entertainment in Las Vegas. "Dayclub" is the word to describe the trend that has been developing in Las Vegas over the last few years as cabana culture has tried to find exactly the formula for attracting the bikini and board short-clad folk who are seemingly gainfully employed but able to spare a weekday for a pool party. I can't even begin to explain all of the amenities amenable to partying that they've arranged at this Stripside pool, but check it out. It is a Stripside pool.

If you want to swim, go to the hotel's other pools.  The Boulevard is designed for the social scene.  Foosball, ping pong, cookouts, makeouts, and live music.

I would definitely recommend going to another show.  Robyn, Mumford & Sons, Nas & Damian Marley, Cake, and The Flaming Lips are on the calendar for the next couple of months.

Back to Girl Talk.

Our other concern: The crowd.  Who were we going to be trying to get our groove on with at this show?  Never to worry.  Girl Talk's fans are awesome people.  Dancing, throwing hands in air, wearing crazy 80's getups or wearing noueveau-grunge hipster wear, it's all good.

The sound was good.

The energy was good.

And do not fret.  Girl Talk is only taking a month off.  He's got plenty of festivals and appearance scheduled from late April on through the summer. So hit a show.  Hit a few shows in a row.  There's nothing wrong with that.

But no gangster lean.

You need to dance, y'all, dance.