There are five things I love about Elbow:

Well actually, there are quite a few more. The band makes excellent music, chooses great songs to cover, and is generally a class act. I wrote about them here before so use the search feature before you read ahead if you're not familiar. 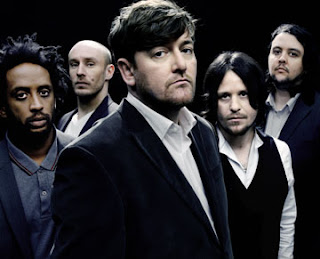 Elbow's new release, Build A Rocket Boys does nothing to tarnish their reputation. After a few listens it falls around the same place as Leaders Of The Free World on the Kilter Lists Elbow's Profundity To Order (KLEPTO) scale. That's actually on the low end of the scale, but let me qualify that statement: A) It's still new to me and it generally takes me a while to really digest an album by these guys, and B) that's like being on the low end of the Times I Had Awesome Sex With A Supermodel scale. When you've been as consistent as Elbow has over the years it's not a question of whether the album is good. It's just a new chance to see what these guys have been up to and remember how touching they can be.

I won't gush about this release. I'll just post a couple more songs for you. This one reminds me of something Erik Satie would have whipped up.

Here's one of the more upbeat songs, which was also the first single:

On an unrelated note, other than they're another of my favorite bands, Veto released their new album in late February. It's called Everything Is Amplified . I haven't been able to find it for sale in the US yet, so I'll admit to checking it out via other methods. It's very interesting, as they're going in a more experimental direction. Once I find a copy that doesn't require me to use babelfish to purchase it I'll write a full review. All I can say is that if you find it out there you need to buy it and support this band. They're one of the freshest things out there, if you ask me.