While My Ukulele Gently Weeps

"If everyone played the ukulele, the world would be a better place." 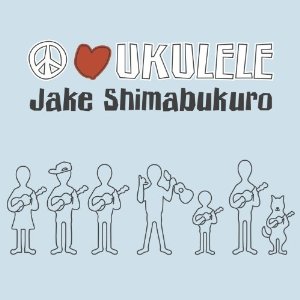 Pay attention.  You are about to read about a young artist who has completely redefined an instrument.  Jake Shimabukuro, a 5th-generation Hawaiian, started playing the ukulele at age 4.  Like "everyone" else in Hawaii.  He started to play along to the pop songs.  He took lessons in other instruments just to improve his uke skills.  Now, as a solo artist, he has released nine albums.  Peace Love Ukulele is the latest, released last month.
Take a listen to "Bring Your Adz":
Click to Enjoy Jake Shmbukuro - Bring Your Adz

I actually saw one of Shimabukuro's performances in upstate New York two summers ago.  It is an entrancing thing to behold.  He transforms the sounds of this instrument.  The reaction to this performance is similar to seeing what guitar virtuosos have done.  To Jake, though, he says on his website that he was more inspired by what he saw other artists do with their crafts:
He says he

"credits Bruce Lee and Bill Cosby for creating the foundation of his art. “Bruce Lee’s philosophy on martial arts was that it’s a form of human expression,” he says. “And he didn’t believe in having one ‘style.’ He studied all forms and was open to everything. That really stuck in my mind as far as music goes. And Bill Cosby – here’s a performer who can just sit in a chair with a mic, tell stories and entrance millions of people. I wanted to tap into that energy, of just performing alone and connecting with an audience.”"

It's true. This is exactly what happens at one of his performances.  He writes each song from a place inside of him.  He tells the story of the song before sharing the music with you.  And you can hear - you can hear what he is trying to convey to you.


From his father's low tank of gas, to secret messages from teenagers, to tributes to Japanese American soldiers during World War II... To the covers...  Each song is a treat.

Watch the TED Talks video of his "Bohemian Rhapsody" cover.

“Covers on the ukulele are hard!” Jake says. “You can simplify any song, but to actually come up with an arrangement that’s respectful to the composer is quite a challenge. With ‘Bohemian Rhapsody,’ I tried to differentiate the vocal line from the piano line and guitar…It was tough, but really paid off. When I play it live, people usually just shake their head and laugh.”

You can see Jake perform in coffee shops, cultural centers, bandshells at your local waterfront park... Check out his page at jakeshimbukuro.com for merch and tour dates. Hawaii and California in March, a little bit of Washington, Texas, Nevada, back to New York again... You will love him.