1. an aptitude for making desirable discoveries by accident.
2. good fortune; luck: the serendipity of getting the first job she applied for.

I've been working my tail off trying to get an advance copy of PJ Harvey's new record, Let England Shake . That has yet to come to fruition, but I happened across something just as exciting along the way: the upcoming Twilight Singers release. It's called Dynamite Steps . Here's the title track: 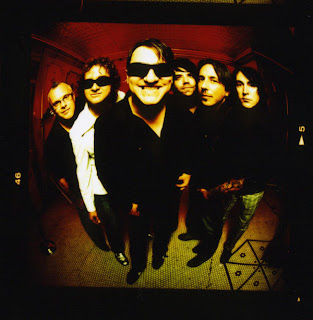 For those of you not familiar with The Twilight Singers, let me give you a quick history lesson. The group was originally formed as a side project by Afghan Whigs frontman Greg Dulli. The lineup has changed quite a bit over the years, but Dulli has a way of pulling things together and making the sound cohesive and epic.

I'm a die-hard Afghan Whigs (RIP) fan to this day but I've never had any complaints about what Greg Dulli lends his talent to, whether it's The Twilight Singers, The Gutter Twins, or any of his other asides. This new album manages to capture an array of styles we've seen from past projects, yet gives us some nice new twists. There's the intensity and raw rock of the Afghan Whigs, the melancholy beauty of previous Twilight Singers albums, and Dulli can never quite escape his soul/Motown roots, but there's still something special and unique about how it's put together.

I'll leave you with a couple more tracks. I need to get back to my quest for Miss Harvey's new album, but I'll have Dynamite Steps on in the background the whole time.

The album hits stores February 15th. Be sure to grab your copy then.