Spare Bricks Can Be Dead Weight

Anthony Raneri's viciously self-aware lyrics have absolutely never failed to create the sharpest possible framework for each song, each album, each live performance. The combination of guitar sounds between Nick, Jack, and Anthony make sure that no matter how complicated the issue these lyrics skillfully dissect, the track will still melt your face. And then there is the skinny little fireball drummer, Chris, who picked up after the devastating death of the band's previous drummer and lead them right through multiple successful albums. Watching him live is inspiring. 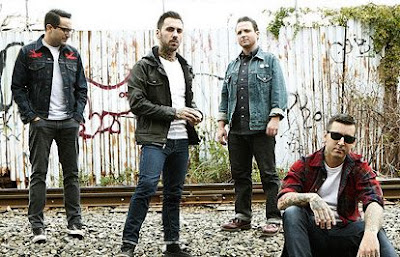 Whether it is in a club setting, a dive bar, or a huge outdoor stage - the Bayside live show is amazing and not to be missed. Record store acoustic performances ain't terrible either. It may be a lot of emo/punk/uncategorized kids who are into this band, but this can't possibly be a bad thing. Let's hope some of Ant's expert wordsmithery makes it into their vocabs sometime soon.

But can a person make a difference if he never makes a sound?

You can't define this sub-genre. It is rock. This is rock music. These are working-class guys. They speak to everyone. You are guilty of committing the crimes these songs have called out. You have felt the pain and loss that they've so eloquently lamented. You've felt as doe-eyed in love. You've felt as murderously wronged. You don't have to be Emo to feel these things. It's rock and roll music (any old way you choose it.)

So buy Killing Time, and buy it for your friends too. I mean buy it. And buy a ticket to their show. I promise you, one will come nearby. These guys tour like a... rock band.

So stand for something cause something's overdue
And I don't ask for much, but this could define a lifetime.