Sometimes things just fall into place. For example, I have to write a post for a little blog I'm part of, and Radiohead happens to release a new album two days beforehand. I like to pretend they check the site every weekend to see my ever-interesting take on music and chose to align the release in my favor. In fact, let's not even pretend: for all anyone knows that's the truth. 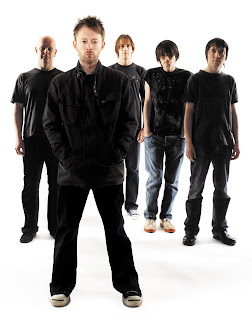 Radiohead
In case you haven't heard, the new album is named The King Of Limbs . It's a shorter affair than previous Radiohead albums, with only 8 tracks. I hardly noticed, due to the fact that the band has pretty much mastered the ability to put me into a trance-like state from the opening notes to the last. Well, there's a bit of an exception this time: "Bloom," the opening track is somewhat chaotic with its bizarre drum beat and droning sounds. It's still great and I found myself humming the bass line after one listen, but it's a somewhat challenging start. From there things really pick up.

That's the second song, "Morning Mr Magpie." It's probably the most driving track on the album. Moving forward you get shifting textures and subtleties that will take many more listens to grasp. Radiohead always manages to keep us guessing, yet through all their experimentation the end result is well-written, often beautiful music.

Since the album is so short I'm not going to post any more songs. I will, however, give you this video for the new single "Lotus Flower." Thom Yorke is just crazy enough to make the solo dancing concept work.

I doubt I need to tell you to get this album. I will anyway. It's excellent. Order it from kingoflimbs.com and you can listen to it now. Unless, of course, you want all the fancy add-ons, like clear vinyl albums and tons of artwork. You'll have to wait a few more weeks for that to be delivered. It will be like Christmas in March!