I Will Meet You In Your Heart 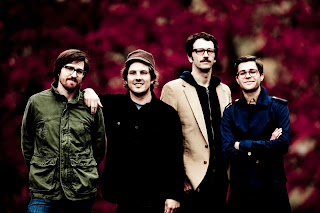 I am currently smitten  with Minneapolis band Tapes N' Tapes. The group is named after the boxes of tapes the band had recorded demos on.
Their first full-length album, The Loon, was released in 2005 and was recorded by the band... Indie DIY style. The recording took place in a Wisconsin cabin with no running water.
Tapes N' Tapes had some great timing with the release of this record. The hype of music blogs had really begun to achieve new heights and prominence. Many up and coming blogs back then wrote up The Loon favorably. They compared them to The Pixies and Pavement. They were hailed as one of the first "Blog Bands". Then Pitchfork Media gave them a "Best New Music" commendation.
The sophomore effort Walk It Off, released in 2008, was not reviewed so favorably. I think it's a great piece of work. It's just a different direction that many people felt had more to do with producer David Fridmann (many consider Fridmann the 5th Flaming Lip for his influence and production on that band).
After a small hiatus, the band is back...and when I mean back, I mean back to basics. Their 2011 release, Outside, was again produced by the band. It is a return to the sound of The Loon. They have regained their status with the bloggers and the fans alike.
I for one can't stop playing this new album. It seems the band continues to be influenced by The Pixies and Pavement, as well as by Modest Mouse and maybe even The Strokes.
The album got me searching for possible hidden meanings of a track titled Outro placed on the middle of the album. I had, at first, thought that maybe they were making a play on the fact that track 6 might have fallen at the end of side 1 of a cassette tape. I did some math...and the end of track 6 comes in at 19 minutes, 52 seconds.  I was right.  Outro finishes "side 1" with a raucous exit.
Click to listen to Tapes N' Tapes - Outro


Short but fucking sweet. There are some great tracks on this album. Buy the album and be sure to check out "Freak Out", which is the band's first single, as well as "The Saddest Of All Keys" which I have set to repeat in my car:


Click to listen to Tapes N' Tapes - Saddest of All Keys