I saw hungry brothers waiting with the radio on

It is a divine pleasure to listen to music that seems to raise music itself to a new standard. Music that creates for you an atmosphere of both tranquility and of surprise. There is experimentation in this music that coexists with the subtle, traditional use of percussion and guitar. 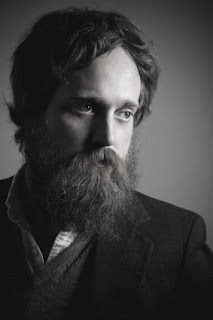 Samuel Beam is Iron & Wine, along with a sometimes- 8-piece band that accompanies him. Name the festival, and they have probably performed there. (Sasquatch coming up!) He has collaborated with a handful of interesting indie bands (The Postal Service, Calexico). His music has been added to the soundtrack of popular television dramas and a movie (thatwhichshan'tbenamed). Beam is an extremely rounded artist, with a background in filmmaking and painting.
In turn, the result of Sam Beam's vision is a wonderfully complete album. Time and time again. The relief that comes from enjoying an album full of various musical contributions that hasn't hit you over the head with its efforts. It's beautiful.
Iron & Wine released its fourth studio album, Kiss Each Other Clean, on January 25. There have been multiple EPs since the first was released in 2002. Over the years it seems that somewhere in the review of each project you will find the words "best yet." When you're multi-talented in this way, and open to learning various ways of making music, there is no other end-product to be expected than excellence in this way.

The opening track on the album always gripped me in a way I couldn't describe, right when I first started listening to the album. But today, "Walking Far From Home" just sounds different to me. The first image I saw online early, early this morning was of the massive demonstration crowding the Parliament in Tahrir Square as Egyptians urged the sitting government to exit. It was an astonishing, inspiring photo with the headline "Military Backs Mubarak As Fury Grows." I prayed this morning; I prayed that this crowd would be blessed.

And hours later, the new headline reads "This is a New Egypt!"

After watching the country fight for a transition of power over the last two weeks, hearing this song now feels like a story that someone who has seen great change could tell. With subtlety.

"It's the greatest day of my life," opposition leader Mohamed ElBaradei told NPR. "I could never have imagined that I would live long enough to see Egypt emancipated. It's an electrifying feeling."

Music can define a moment for you. Iron & Wine has the ability to define just about every moment.

Email ThisBlogThis!Share to TwitterShare to FacebookShare to Pinterest
Labels: hosni mubarak, iron and wine, kiss each other clean, this is a new egypt, walking far from home