crooning from the darkness

What do you do after you've nailed multiple genres and been in highly-respected bands like Murder City Devils and Pretty Girls Make Graves? You change it up again, of course. 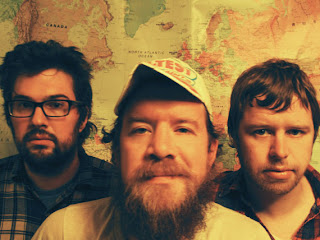 Derek Fudesco, of the previously mentioned bands, is now a member of The Cave Singers. Their third album No Witch dropped this week. It's a folksy romp of an album full of understated guitars and melodies that could bring the Hatfields and McCoys together for an afternoon luncheon. It made me want to drink a bottle of moonshine and dance around in bare feet. In other words, it's got a downhome swagger that you just can't avoid. Here's the opening track as an example.

Click to play The Cave Singers - Gifts And The Raft

I'd put this album right up with some of the better folk/blues albums around right now. The Cave Singers can hang with The Black Keys, sure. Just let me know so I can be around to listen in.