The Beauty of Music 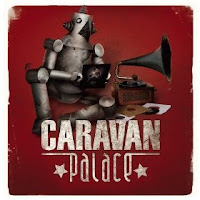 So recently, I found out about a band that I didn't know of. And this led me to be reminded why music is so important. I overheard a new co-worker discussing Grizzly Bear with another co-worker. I interjected, as I had seen them live once. Five minutes of music discussion later, I got a nice compliment - "Man, you really know your shit." Thing is, I don't. Or at least I don't think so. He brought up the group I am sharing today, and I hadn't heard of them. Well, after a good night out with a few co-workers, we all eventually took a listen to these guys. Which I think we all do from time to time. We get excited about the music we like and want to share it with the world. I mean, isn't that the whole point of this blog?

Anyhow, the group he wanted to share was Caravan Palace. Now, they're a French band. Imagine if swing and electronica had a baby. There are some that try to say that Daft Punk is one of those influences on them, but i don't hear it in the music they play. I'd say more with the idea that electronica can be incorporated into almost anything. This sound has been done before, though. As George could tell you, for example, I played a ton of swing-house in the years I DJed. I genuinely liked a lot of it. I even featured one of the Greens Keepers tracks on this blog a couple of years ago.

Well, these guys are less about sampling, and more about creating their own swing sound mixed with drum kicks and electronic goodness. The self-titled debut album of these guys produced the track I'm posting today. "Jolie Coquine" is definitely reminiscent of the Squirrel Nut Zippers female vocals - which is where James Curd sampled from - and is very frenetic and catchy. The video for this track is even quite creative. So enjoy! And remember that music is a very open showcase. You're welcome to dislike music, but keeping an open mind about what is out there is very rewarding!