All I know is you / No I can't change

I had just barely gotten into their last album when I heard a new one was being released. The Joy Formidable is a Welsh band who has been together since 2007. They released single after single in the subsequent years until putting them together on A Balloon Called Moaning in 2009. Well, 2009 in the UK. We didn't get it in the States until May 2010. Seriously.

I really like each track on that album. Whether or not they were meant to be connected, they all sound simultaneously somber and energetic. I'm good with that. You know what's interesting, is that their original label for this EP was none other than Black Bell, which is run by Passion Pit's Ayad Al Adhamy. Huh. Yeah. I get that too.

Here. Listen to maybe my favorite track on Balloon, "Whirring". 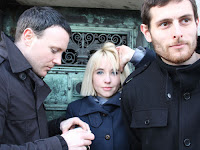 So, here we have Ritzy Bryan leading us on vocals whilst strumming her guitar, Rhydian Dafydd on bass, and Matt Thomas on drums and other forms of percussion.

I love this sound and I can't even understand half the lyrics.


Well, wait.  Until you start banging things and yelling and being offensive.  I mean, that is communication but it's not effective.  That's how their full-length album starts out.  Noise.  Just, noise.  I should get the art angle they are going for.  I should be open to receive the music language they are speaking.  But, I'm not.  Oh well.

So, this full-length album came out in the UK last week, but - you guessed it.  NOT AVAILABLE IN THE STATES YET! So consider yourself lucky that I am sharing it with you now. Well, unless you are already reading this from across the pond. Then, chap, how about if you leave us a comment about their show this evening? Or head over to one of their upcoming shows... Glasgow King Tuts on Sunday, Edinburgh Electric Circus on Monday, wow... I am checking their tour dates and there are some cool venue names. Add that to the list. Go to indie performances in London.

And bring a sandwich.

I mean because of the food.

No, but seriously. I digress.

After we get through the banging and clanging at the beginning of The Big Roar, we are right back into big, lovely sounds. This album was recorded with Camelback Music, which married Atlantic in late 2009 and operates on a "less is more" mentality.

Kind of how these three manage to make themselves sound like an entire Cricket team. Wait, how big is a Cricket team after all, mate? Big enough to at times sound like a choir is chanting the barely audible yet still powerful lyrics and a drum section is pounding out that percussion. Seriously.

Here. See what I mean.

Then check amazon.co.uk and see if you can get a hold of this year's next year's album!