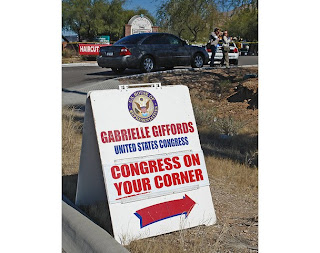 NOTE: I am including the link to write your Representative here and at the end of this post.

Anyone that's known me for a while knows how strongly I feel about many issues and how readily I display my emotions on my sleeve. I've learned to temper it a bit the older I've gotten, but occasionally, it still overflows and comes out as pure anger. The events of Saturday, January 8th down in Tucson, Arizona are a good example of this. Now Representative Gabrielle Giffords is in critical condition, and six are dead.

Arizona has been the subject of many jokes within the last year. The controversial immigration law they enacted inflamed passionate debate amongst both sides. Extremes were certainly brought out on both of those sides, but common sense tells us that if we want to end a problem, we work to display some patience and forward-thinking. The state of Arizona didn't didn't display those traits, and is now facing a PR nightmare about it's image. That's a conversation left for a different day, but the point is that these problems continue to bog down the state.

In 2004, a Republican led Congress let lapse the Federal Assault Weapon Ban. If this had been in place within the last few weeks, Jared Loughner maybe wouldn't have committed the atrocities we bore witness to on the 8th. However, as was stated pretty clearly on BBC News' World News America, the NRA and the small percentage of people in this country who care solely about gun restrictions make up a large voice. We may never see a day where we can go worry free about the threats we saw carried out in Tucson due to this misguided logic.

We're watching both sides point fingers over this tragic event. If you're reading this, and you're blaming liberals? Or the Tea Party? Or anyone, for that matter - STOP IT. The only way we will ever see an end to this senseless violence is by working to prevent it. By using that same patience and pragmatism I spoke of earlier. That doesn't equate to taking your guns away, as the NRA would have you believe. This young man was initially unable to buy the bullets he sought, believe it or not. He instead went to a second Wal-Mart and made the purchase there.

Just think about that. While you are in a Wal-Mart with your young son or daughter looking at buying a bicycle, a man is buying bullets. Bullets are not the harmless creation the NRA would lead you to believe. They are made for a single purpose. When this first came about, I couldn't help but think of a good quote by comedian Eddie Izzard from his stand-up special Dress To Kill.
"The NRA says 'guns don't kill people, people do.' But I think that the gun helps."


The solution? Is not more guns. Restrictions on firearms need to be in place. We need laws in all fifty states that require proper training by civilians for use of these weapons. Proper registration and storage at homes need to be in place, also. If you insist on owning a gun, I have no issues with that. I have to stress this. However, a gun is a major responsibility. On top of being a responsibility? It's a privilege. One that I feel should be taken away if you can't prove that you are enough of an adult to do what are honestly very simple things.

For anyone that may call my opinions into question, I've lived a life where as a child, I grew up around weapons. I never liked them, but thankfully, they were stored properly. If you were to ask anyone in the military or that works for your local police, they will likely agree with me on the changes I've spoken of. Many I've spoken with have agreed.

Lastly? That link again to write your representative. Take five minutes and express your concern.