This is us all trying not to be sober

When did the news become entertainment?

Right out of the gate this album, as it was designed to do, grabs hold of you and tells you there's no way you're not going to listen to this. It's too important. So sit down. No, wait. Stay standing. And raise your fist.

So content to live in your ignorance while they manipulate and tell you it's true.

Don't think it's just FOX News with the spin and rhetoric. Politicos on both sides love the ignorant masses who will remain divided and follow the wildly dramatic claims and warnings. 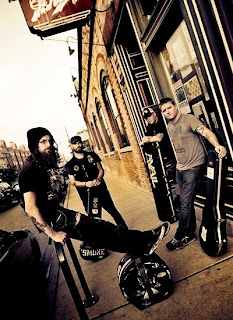 Smoke or Fire have been writing hardcore punk songs with lyrics full of social commentary since 1998. At the time, they called themselves Jericho. They had changed their name by the time they recorded the album Above The City in 2005 with Fat Wreck Chords. They stuck with the label ever since, and in November of 2010 released The Speakeasy.

The commentary in the lyrics are not focused solely on the sad state of our humanity. Songwriter Joe McMahon dispenses words of advice to other bands in the industry in Track 6, "Hope & Anchor."

Those days are over now, what started off as fun
Has made you question everything and not trust anyone

It's this and "Porch Wine" that can be used more as personal anthems rather than revolutionary battle cries. Also, I love this track musically more than the others on the album:

The realization of great potential
Leads to the feeling of an emptiness
And what to fill it with in our time?

All I can offer you is a shrug. Find something lasting to fill it with. Make a change. Quote pundits on your FaceBook page and do nothing. Self-medicate. The only certainty is death.
(And taxes.)

We are fucked, but I Love You.