Earn it and burn it 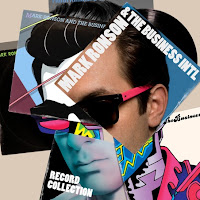 If you have heard the name Mark Ronson, it might be because of his production work on Amy Winehouse's Back to Black album. For his work Ronson would win three Grammy's for "Producer of the Year, "Best Pop Vocal Album", and "Record of the Year". You might know that... but not know that Ronson is also a DJ, guitarist, singer/songwriter, and co-founder of the music label Allido Records.

Mark Ronson and his new backing band, The Business Intl., released an eclectic album called Record Collection on September 27th, 2010. It was, rather quietly, a success. Quiet in the States at least. The first single off the album peaked at number 6 on the UK singles chart and number 18 on the Irish Singles Chart.

I find it surprising it never caught on here in the US though. It seems most of my generation is uber reminiscent of the 80's. This album has such a great 80's sound and vibe to it, that I think if more people actually gave it a listen, that they would absolutely love it. Mark Ronson is able to tie in the sounds from 30 years ago with the present pretty easily. It's so flawless in its union, it just shocks me.

What's more 80's than Boy George? The song "Somebody to Love Me" was the third single released from Record Collection. Take Boy George and have him sing alongside the front-man from Swedish indie group Miike Snow...throw in some keyboards and a dope breakbeat drum line, you have a synergistic meld of decades of music!

Even with the 1980's making appearances all over the album, there are also other guest collaborations to be found on Record Collection. Q-Tip, D'angelo Spank Rock, Ghostface Killah, and even the London Gay Men's Choir all offer some great moments on the album. Ronson also lays down vocals on a few of the tracks.

There is an adorable video for track 8 off the album, the song "Circuit Breaker". The song is just an instrumental track that features California turntablist/DJ/producer Teeko. The video is an 8-bit gamer's dream and was directed by Gary Breslin and Jordan Galland. Check it out below.


"CIRCUIT BREAKER" by Mark Ronson from gary breslin on Vimeo.

A Zelda like character, that I am assuming is Ronson, slashes and parries his attackers while he collects all the pieces he needs to create a turntable that he can use for the final boss. A DJ battle ensues and the protagonist gets his girl!

There is a ton of good stuff on this album. You can stream the entire thing here. After listening to it, I can't imagine you won't be buying it.