Smiling but We're Close To Tears

I heard this song every once in awhile on the radio. And I just assumed it was Rob Thomas. I know the hipsters hate Rob Thomas. I hate what our idea of Rob Thomas is, but I actually kind of like him. I probably wouldn't buy tickets to his concert, but when I make jokes about him being untalented, it's just jokes. He is one of the front-runners of a genre for which I have a strange taste in my mouth. Train. Jason Mraz. I just can't point out what it is. And it's not that I'm being a music snob or hipster. Today's soft rock just rubs me wrong.
So back to the point... This song. "Breakeven."

Her best days will be some of my worst
She finally met a man that's gonna put her first
While I'm wide awake she's no trouble sleepin'
'Cause when a heart breaks, no it don't break even

It STILL sounds like Rob Thomas. I only realized it was by a band called The Script because I saw it on the music I.D. in my car stereo. And I barely cared to look further into who this band was.

Meanwhile, all of the United Kingdom has been losing their collective minds over this band. Selling out shows. Selling out entire tours. Getting their albums long before we get them in the States. Well. Kind of like what some people had been doing over here for M-raz and Train for quite awhile, isn't it. 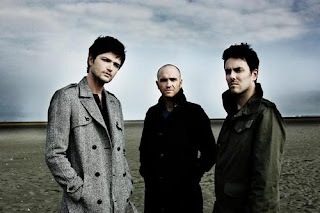 But recently I saw the video for the single off their second album. It made me think. A lot. So I BOUGHT THE SINGLE. And I bought the self-titled debut album too. I'm listening to the album now. If I have to say the name Jason Mraz again I might throttle myself, but I'm just saying... /cough

And it's not like they physically resemble any other three-piece from the States. Or pose like them.  Not at all.

OK, I have fully delineated my disclaimer. I'm not into this kind of music. You GET it.

But there are so many reasons that compel me to share their new single with you. Science & Faith won't be released in the States until January, but they just released "For the First Time" and shot the video starring Bono's daughter. (They are having such a ridiculous British lovefest over this band, I am telling you.)

Changes take place in our lives... Things happen to us. We happen to things. And we resist. Or the people around us resist. We start fighting. We hurt the ones we love. Over the loss of a job. A frightening health discovery. Any difficult process. Resistance. Weakened defenses. Stress. We fall prey to it. We will cause tension, friction, conflict.

"If you're going through hell, keep going." --Winston Churchill

"If I had a formula for bypassing trouble, I would not pass it round. Trouble creates a capacity to handle it. I don't embrace trouble; that's as bad as treating it as an enemy. But I do say meet it as a friend, for you'll see a lot of it and had better be on speaking terms with it. " -- Oliver Wendell Holmes

I just want to send this track out to all of you - I know in some way you're being affected by, whatever it is - the economy, your parent's health, your health, other adversity.

Click to Play The Script - For the First Time

I can't wait to meet you all over again when we get through this. It's going to be beautiful. And then we'll go through it again.